Mark Masker, Managing Editor
Mark is a freelance journalist based out of Los Angeles. Ten years ago he fooled the motorcycle industry into thinking he could write and shoot photos. He’s now trying that same trick with the culinary arts. He’s our Do-It-Yourself specialist, and happily agrees to try pretty much every twisted project we come up with.

Emily DeWitt-Cisneros, Food Editor
Emily makes sure the food looks good in our photos and ensures that our recipes turn out right when you cook them (unless you screw up, of course). She’s the co-producer of the Scovie Awards and the National Fiery Foods & BBQ Show, which means she knows the dirt on everybody in the industry. She loves all things spicy, and lives in Albuquerque, New Mexico.

Harald Zoschke, European Chilehead Editor at Large
Harald fell in love with the hot & spicy industry in the ’90s, at the National Fiery Foods Show. In 2001 he started Pepperworld, the first online Hot Shop in Germany. Harald’s Chili Pepper Buch 2.0 is the bestselling chile book in German-speaking Europe. He covers European chilehead culture and his own spicy kitchen encounters for Burn!. 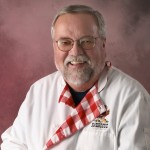 Rick is the former host of “Barbecue USA” on PBS and is the author of more than 15 books on BBQ and Restaurants.