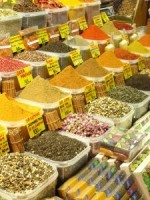 Africa has the most varied curries in the world–with the possible exception of India. They range from spice mixtures with aphrodisiac beetles to scaldingly hot chile pepper blends to elegant weekend curry lunches at the club.  The contrasting curries reflect the ethnic diversity of Africa as well as the influence of the seven European countries that colonized the continent: Britain, France, Germany, Italy, Portugal, Spain, and Belgium.  In addition, there were strong culinary influences on African curries from unexpected places: the Middle East and the Spice Islands.

North Africa has a curry tradition that goes back two millennia.  The Middle East and Rome were the two main influences on the curries, and it is likely that the first Asian spices were introduced into the region by the Phoenicians, who in the seventh century B.C., traveled from northern Syria to establish colonies in North Africa at Algiers and Carthage.  The Phoenicians invented a dried sausage to sustain them on long sea voyages, and they carried with them spices such as nutmeg, cumin, coriander, and cloves, which formed the basis of Middle Eastern spice blends such as baharat.

During this time, there were no countries as we know them now in North Africa; rather, the region was known as Maghreb and it was inhabited by nomadic Berbers.  It is likely that the Phoenicians–or the Carthaginians that followed them–introduced durum wheat to the region.  The wheat became a favorite of the berbers, who invented couscous, a granular semolina that is now a staple food in North Africa. 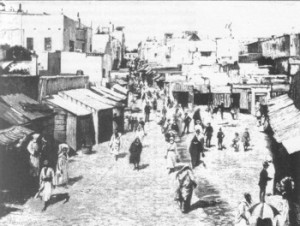 The Romans needed wheat to feed their growing empire, and began trade with Carthage around the first century B.C.  It is likely that the Romans also introduced their beloved spices into North Africa, such as black pepper and cinnamon, as part of the trade in wheat and other foodstuffs.

During the seventh century A.D., North Africa was invaded by Arab armies, which brought additional spices to the region.  However they arrived, spice mixtures became very important in the cuisines of North Africa, and they are some of the most unusual curry combinations I encountered during my globe-circling curry tour–a direct result of the availablity of seasonings in the region.  “The North African housewife can choose from up to 200 different spices and herbs when she stops to replenish her supplies at a spice stall in the souks of the medinas,” observed food historian Harva Hatchen.

This diversity is reflected in the unique spice mixture ras el hanout, which is prepared with twenty to thirty spices ranging from the familiar to the downright weird, including belladonna berries, iris leaves, and Spanish fly–the reputedly aphrodisiac cantharide beetles.  The name means “top of the shop,” or “shopkeepers’ choice,” and indicates the fact that the mixtures are individually prepared by each spice seller.

If the ras el hanout itself is too tame, then I present the ultimate high of North African curries: el majoun, a sweetmeat of almonds, honey, butter, fruits, spiced with a dangerous dollop of the aphrodisiac ras el hanout and a heavy helping of hallucinogenic hashish.

In 1846, the French poet, novelist, and dedicated hashish devotee, Theophile Gautier, described majoun in his book, Revue des Deux Mondes: “The doctor stood by the side of a buffet on which lay a platter filled with small Japanese saucers.  He spooned a morsel of paste or greenish jam about as large as a thumb from a crystal vase, and placed it next to the silver spoon on each saucer…. ‘This will be deducted from your share in paradise,’ he said as he handed me my portion.”

The effects of the majoun (left) were strange indeed, especially in a culinary sense.  “I had experienced a complete transformation in taste,” wrote Gautier.  “The water I drank seemed the most exquisite wine, the meat, once in my mouth, became strawberries, the strawberries, meat.  I could not have distinguished a peach from a cutlet.”

Incidentally, cannabis was introduced into Europe from North Africa in the form of a curried aromatic cake called dawamesk, which was composed of sinsemilla (seedless) Cannabis flowers, sugar, orange juice, cinnamon, cloves, cardamom, nutmeg, pistachios, and pine nuts.  One of the principal importers of dawamesk was the notorious Le Club de Hashischins, a group of hashish-loving Paris intellectuals led by–who else?–Theophile Gautier!  Among the club’s members were Victor Hugo, Honore de Balzac, and Charles Baudelaire.

The most famous North African curries, served from Morocco to Egypt, are called tajines, and they are named after the earthenware tajine pot in which they are cooked (at left).  Just about any meat–chicken, pigeons, mutton, beef, goat, and even camel–can made into a tajine with the exception of pork.  The meat is usually cubed, and, according to Harva Hatchen:  “The cooking liquid is the secret of a tajine’s tastiness.  This is usually a combination of water and butter or oil (characteristically, olive oil) and seasonings to suit what’s being cooked.”

Over in West Africa, particularly the former British colony of Nigeria, the curries are distinguished by an extra infusion of hot chiles.  As Ellen Wilson, author of A West African Cookbook, has observed: “Learning to eat West African food means learning to enjoy [chile] pepper.”  She added: “West African dishes can be searing or simply warm, but it is noticeable that the [chile] pepper never conceals the other ingredients; in fact, it seems to enhance them.”  Notice the red chile powders in this market in Nigeria, at left.

Another distinguishing characteristic of Nigerian curries is that they are served with an inordinate number of accompaniments.  In addition to the usual chutneys and raisins and shredded coconuts, the Nigerians offer as many as twenty-five condiments, including chopped dates, diced cucumber, diced citrus fruits, ground dried shrimp, diced mangoes and papayas, peanuts, grapes, fried onions, chopped fresh red chiles, and bananas.

“Nigerians and old African hands,” noted Harva Hatchen, “spoon out a portion of everything so their plates become a mound of curry and rice completely hidden by a patchwork of color and tastes.”  In some parts of West Africa, where the British traditions are still apparent, the larger hotels serve a weekend curry lunch.  The tradition came from colonial officers who had been assigned to Africa after their stints in India.

This blend is used to spice up tagines (stews), rice, and couscous.  It is the only curry powder I know of that utilizes dried flowers.  A true Moroccan recipe would also include those shiny green cantharide beetles known as Spanish Fly.  Some other hard-to-find spices, such as nigella, orris root, and even the dangerous belladonna berries would also be added, but this recipe is my drug-free approximation. Paula Wolfert, in her book Couscous and Other Good Food from Morocco, states that “it is incorrect to think of ras el hanout as curry powder by another name” because it lacks sufficient amounts (or any, in some cases) of cumin, coriander, fenugreek, and mustard.  However, most versions of ras el hanout contain other major curry spices, such as turmeric, ginger, cinnamon, nutmeg, black pepper, and chiles, so let’s compromise and say that the mixture is a variation on curry powders.

Editor’s Note: We excerpted this from Dave DeWitt’s World of Curries, which has plenty of recipes in it too. Pick up a copy here.