On September 15th, Mexico celebrates its independence from Spain. In 1810 the war that would last ten years gave birth to Mexico as a nation. September is thus a month of celebration for us, not just the 15th. This is also the month of abundance of fresh walnuts and pomegranate, two ingredients dubbed indispensable for Chiles en Nogada: roasted Poblanos stuffed with ground beef, pork or seafood, covered with a cream and cheese walnut sauce, all this sprinkled with grains of pomegranate and parsley leaves. This complex dish—colored as the Mexican flag—belongs to those rare dishes that can give you an incredible blend of flavors while you devour them.

As usual, the history of chiles en nogada includes myths that are hard to separate from reality. Most Mexicans believe for example the story that Mole Poblano was created by nuns in Puebla to offer it to a distinguished Viceroy visiting the city. There is also a story about some nuns in Puebla—nuns in Puebla again? sure, why not?—that created chiles en nogada in 1821 to offer it to Agustín de Iturbide, hero of the Mexican Independence. Alas! The nogada sauce recipe appeared in a 1780 cookbook written by Friar Gerónimo de San Pelayo, some 40 years before the Independence war was over. This sauce was used first for desserts and there was a “fine version” of it made with almonds instead of walnuts.The use of the nogada sauce on a pie or ice cream would constitute a serious offense to today´s purists. Indisputably, Mexican food history is a great area of opportunity for serious researchers. 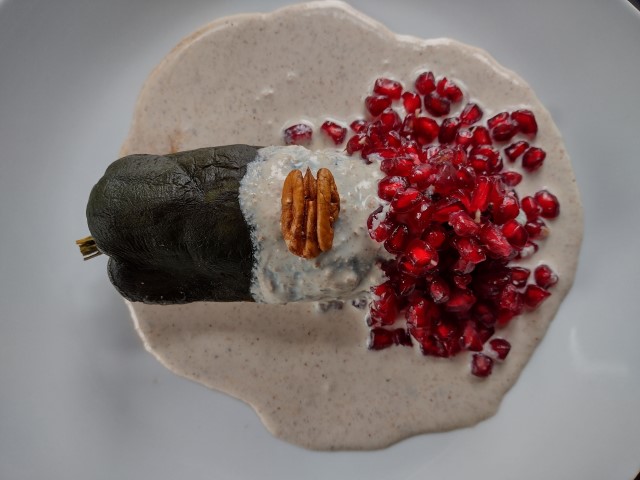 I believe in the theory of evolution, food-wise that is. Moles in Mexico are the evolution of pipianes, pre-Columbian sauces made with chiles and pumpkin seeds, herbs, and spices. Nuns in Puebla probably added chocolate and cinnamon—among other ingredients—to a pipian and mole poblano was born. I submit that chiles en nogada existed before the nuns added the green parsley and the red pomegranate grains to resemble the colors of the Mexican flag desperately needed for the occasion. But who is to say that parsley wasn’t added only to complement the colors of the Mexican flag—not flavor—and that it was the only “green” available in the kitchen that day?

Before chiles en nogada were stuffed with meat, they were filled with fresh fruit only and served as desserts. Later the fruits were replaced with meat and the dessert became a main dish. I have tried stuffing chiles with 100% beef and they taste very good provided the beef has some fat. Pork is added because of the undeniable good flavor of its fat. Common knowledge dictates today that a mix of half and half beef and pork is the best. This would be defended to death by most even if they don’t know that the role of fat or oil in any recipe is to become the vehicle of flavor. How about seafood? Oh well now you are talking about a major sacrilege! That’s a no-no for purists! Well, recently I had the opportunity to taste a seafood stuffed chile en nogada in a respected restaurant. The sauce was made with walnuts, which in my opinion needed more punch. I was not impressed. The stuffing however was interesting. The seafood mix included shrimp, octopus, crab meat, and dried fruits—recipe below. It was fine by itself, worked excellently with the roasted poblano, but when mixed with the walnut sauce, in my view, the marriage just didn’t work. I, however, would like to try one stuffed only with crab meat. 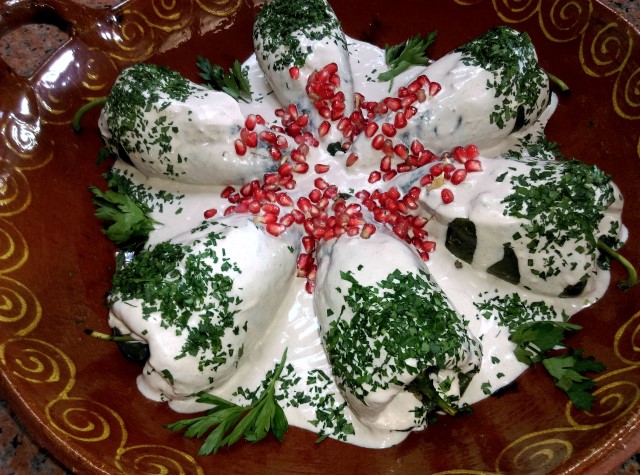 In a book that reproduces recipes from the early 1900´s in Jeréz, Zacatecas—birthplace of my grandmother on my mother’s side—appear three recipes for chiles en nogada. The use of pecans and almonds is called for and only one recipe suggests the use of walnuts if available.

Today the most significant “sin” or “sacrilege” by purists is to substitute walnuts for pecans in the sauce. How about almonds as the old recipes call for? No way José… I personally use pecans and the reason is simple: I like the flavor of pecans better than that of walnuts; crucify me for that. By the way, pecan tree in Spanish is nogal… Walnuts need to be soaked overnight and peeled painstakingly one by one. I don’t have patience for that and the flavor obtained is not superior to that of pecans. Now I´m ready for sentencing…

But the discussion is not over yet. There is a debate whether the chile en nogada should be battered or not. My view is that you already have a wonderful combination of fine flavors, why add eggs and flour? There is also a popular version in the State of Yucatan where the whole chile is wrapped in puff pastry and baked! That I want to try!

My latest chile en nogada experience was at the home of Chef Malú Rodríguez Elizondo near Mexico City. I consider her recipe—included below—a classic. The subtle differences in her ingredients to other contemporary recipes produced a completely different and genuine flavor. This was an enlightenment to me on the wealth of extraordinary flavors this dish can produce. Thank you dear Malú for the memorable experience and for sharing your wonderful recipe with us!

The following recipes need six chiles poblanos fire roasted, peeled, seeded, and deveined. The chiles need to be fully cooked but firm to hold the stuffing properly. I recommend roasting the chiles and cooking the stuffing a day in advance to simplify the process. The stuffing will turn taster this way as time facilitates the blending of the ingredients´ flavors. 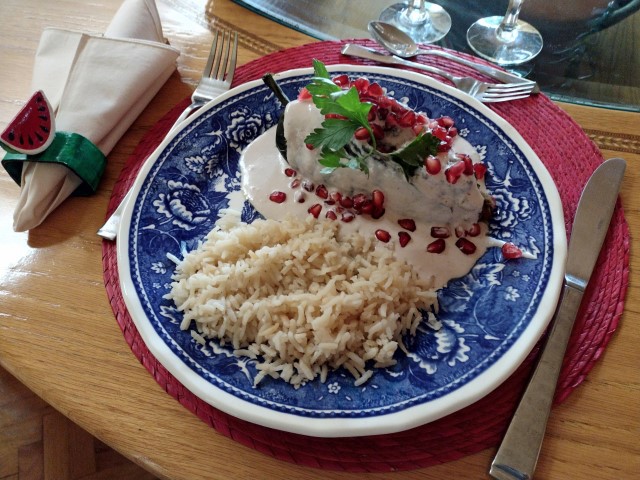 For mounting the plates:

An interesting dish for seafood fans. 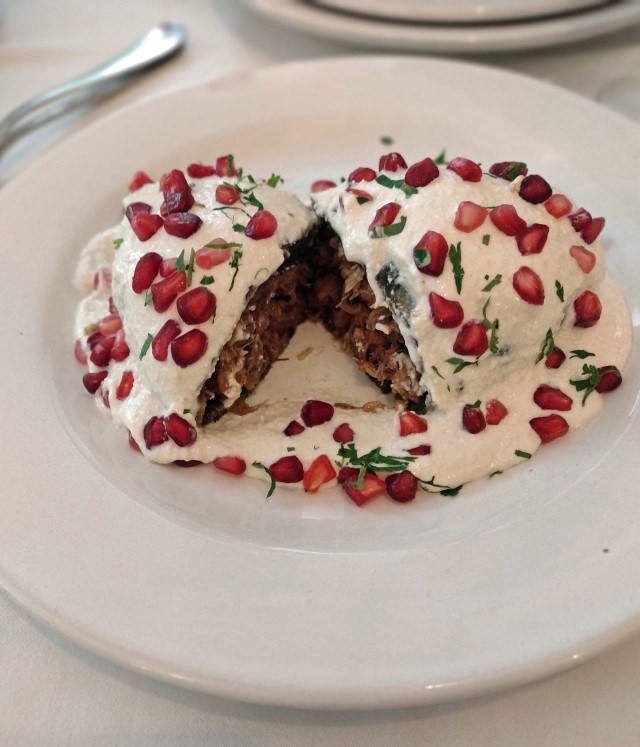 For mounting the plates: