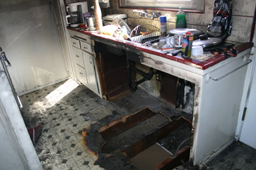 This lady is crazy.

That’s the first thought that went through my head when the woman in the apartment next door yelled frantically over the phone.

“What do you mean, ‘your apartment’s on fire?’ I asked while cramming yet another slice of juicy, smoked tri-tip roast into my maw. That’s a pretty stupid question, actually. There’s no ambiguity when it comes to being on fire; you either are or you aren’t. Don’t believe me? Ask a Buddhist monk protesting a war and see what he says. Anyway, it turns out my ego mislead me into incredulity. Yet again.

“Aie, Mark, I’m telling you. The wall between our two apartments is really hot, and there’s all this smoke–”

That, on the other hand, was a great question. Were I able to, I would’ve gladly complied. However, I was at a potluck barbecue in Garden Grove, roughly forty miles away. Was it faulty wiring? Had the crazy old pirate living downstairs finally shot his cannon indoors?
No, really. There’s an old Renaissance Faire pirate who lives below me. Yes, he actually owns a 200 lb cannon, yes, it actually fires, and yes, he’s stupid enough to let something like that happen. All I knew was, there was no way whatever was happening was my fault. I’m way too responsible for that. Why, just that morning, I’d put the coals from yesterday’s smoke cooking in the trash right before coming down to Garden Grove–

Right, I need to not put my coals in my kitchen trash can ever again. What really bothered me was, I knew better. I really did. The coals had been left out overnight and their pan felt cool to the touch. It turns out the wily little bastards were playing possum; just waiting for the chance to avenge themselves on me for burning them.

I told her to call 911. Then, I had the distinct pleasure of telling my best friend (and landlord), Sam, that my kitchen was on fire. Luckily, I didn’t have to go far. He was standing right next to me when I got the good news. We hopped in the car and hit the freeway. Needless to say, he was thrilled, and his driving reflected that. While he was James Bonding it northbound on I-405, Joanna called me again with more good news.
“Do the firefighters really need to make a big hole in the roof?” I asked in response. Increased engine roar told me how my buddy felt about the matter. I wondered if he’d dispose of my body in the desert or the ocean. Or both.

It took us twenty minutes to get to the building. I expected the worst because the fire department doesn’t start making holes to be whimsical. They’re not politicians. My first glance at the building gave me hope—there was no outside physical damage. Not even soot residue. Lots of smoke, sure, but no flames. Woohoo! No shallow grave for this guy!
Joanna was outside the building waiting for us. I expressed my gratitude by offering to father her firstborn child. She took a rain check, then Sam and I went upstairs to talk to the fire marshal. Walking through my busted front door, my eyes were greeted by that scene in Star Wars where Luke comes home to find his aunt and uncle a-charring in the front yard. There are times when being a smartass can liven up the mood. There are others when it can give you a coma. I resisted the urge to say, “You’d have been killed, too. And the droids would now be in the hands of the empire.”

In other words, my apartment was redecorated in a soot motif. The look screamed mid-1800s English chimney sweep. All the windows were open to let the smoke out. We looked for holes in the ceiling and were pleasantly surprised not to find any.

“Turns out we didn’t need to make them,” the marshal told us as he walked into the living room. “The fire was smaller than we thought.”

He was extraordinarily happy about the whole situation. Maybe it was because it wasn’t his apartment?

No. The marshal was thrilled with the prognosis. He looked forward to delivering good news for a change. Guiding us through the wreckage into the kitchen, he couldn’t wait to tell us what caused it. He was on a roll! Unfortunately, so was I. So far, I’d ruined the day for Joanna, Sam, and myself. Why stop there?

The marshal indicated a melted plastic corpse that was once a trash can. “It seems,” he began, “that someone–”

“Put some old coals in the trash like an idiot,” I finished for him.

“Basically,” he replied, a little deflated. Then he recovered. “You lucked out, though. The damage to the apartment was absolutely minimal!” According to him, I’d burned my domicile the best way possible.

Between the soot, the smoke, and the gaping four foot hole burned in my kitchen floor, I wondered what his idea of “bad” would be. Oh, and let’s not forget the gutted kitchen counter! Again, I avoided bodily injury by keeping my mouth shut, though. Looking around, however, I got what he meant. The actual damage was only the counter and that hole in the floor. All the rest of it was simply clean up, repainting, and some new carpet. My place needed all of that before the disaster, though. It seems I’d lit a fire under my ass to get it done, by actually lighting a fire under my ass to get it done. Shortly thereafter, LAFD’s work was finished and they took off to deal with the next idiot in need. This is when the real ordeal began.

That’s when I found out that the funnest part about burning a building is the actual burning itself. Just as long as no one gets hurt. Everything after that blows goats. Whenever there’s a house fire, the fire department files an incident report. Fire clean up contractors and “consultants” jackal their way to the kill to pick the insurance claim clean. They hover in a circle, looking for new incidents to swoop down on for whatever carrion they can get. I know this because they kept stopping by for the next three days telling me all kinds of ways I could use the fire to really stick it to my best friend. He’d forgiven me for the fire, so I let my middle finger do the talking. Then I got down to business and cleaned it up myself.

All told it took me almost a month. Everything I owned had to be washed with citrus degreaser and you can’t just throw paint over soot. I had to buy actual soot erasers and rub it off the walls. Soot particles are too fine for soap and water; conventional washing just rubs it into the drywall.

By now you’re probably wondering why I’m sharing such an embarrassing story with you on the blog. It’s simple, truth to tell. I wanted to set the tone. Whenever I try something odd, creative, or silly here, I’m going to be honest, whether it ends gloriously or horribly. Oh, and hopefully, it’ll be funny. That’s what happened with my apartment fire a few years ago when I first started charcoal smoking.

Since then, I’ve turned into a paranoid psycho when it comes to disposing of used coals. I wait at least a week before throwing them out. Even when this fun little incident went down I knew you should either wait before getting rid of them, or have a non-flammable container to put them in. I was careless and it cost me. But hey, hopefully you got a good laugh out of it.