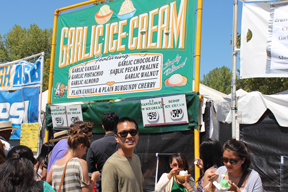 I love the Gilroy Garlic Festival almost as much as I do our own National Fiery Foods & Barbecue Show. For the last thirty five years, California’s garlic hub, Gilroy, has hosted an annual event dedicated to The Stinking Rose (aka garlic). The event was founded way back in 1979 by Dr. Rudy Melone, Val Filice, and Don Christopher. Mostly likely as a way to celebrate garlic and raise money for charities, not so much as a way to deal with Northern California’s notorious vampire infestation. 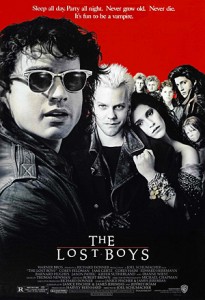 No, the Gilroy Garlic Festival has been much better at raising money for charities than stopping undead teenage bloodsuckers. Which is good, since the Gilroy Garlic Festival Association is a non-profit dedicated to supporting local groups in projects in the Gilroy area. Over the last three and a half decades, the event’s raised about $9 million for a variety of causes. Individual groups and charities also run booths at the festival, raising additional funds for their causes. 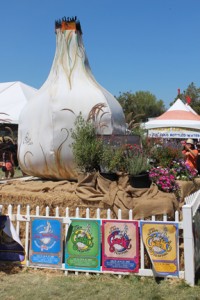 “But, Mark,” you ask, “I’m just a food hound with a little money. What’s in it for me? What do I get?” Let me put it like this. If anyone ever wrote a recipe book using all the configurations found at this event, it would read like the Kama Sutra of garlic. Each year, the festival’s Great Garlic Cook-off draws entries nationwide. Every September, the festival calls for the best garlic recipes in the U.S. and Canada. Amateur chefs respond by the hundreds, all vying for entry into the competition. They’re anything but shy about what they submit, too. From soups to desserts, if it goes good with garlic, chances are it’s been to Gilroy. 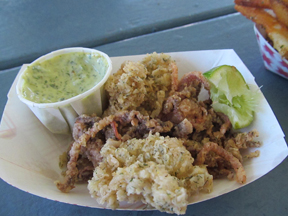 Not all of the entries make the final cut, though. Fifty(ish) of the most appetizing candidates are sent to a professional food consultant who narrows the field to the final eight. From there, the finalists come to Gilroy to prepare their recipes live on Saturday. Judging takes place after noon.  The victor earns a crown of garlic. Oh, and $5 thousand. Cash awards are also given to the other seven entrants as well. 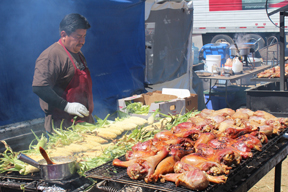 This year there was a first, though. Never in the 35 year history of the Gilroy Garlic Festival has there been a barbecue competition to go with it. “Pigs in the Park with Garlic” didn’t have a record number of contestants, but it damn sure has a shot at World’s Longest Title for a Barbecue Competition. The festival committee chose four local pro barbecuers to duke it out over coals in what is hopefully year one of this freestyle Round Robin of Ribs.*

Obviously, the teams had to use garlic in the making of their ribs. Ed Somerfield and his Big Ed’s Buzzard BBQ crew prepped their ribs with olive oil, garlic, minced garlic, and molasses before coating them in his own barbecue sauce and wrapping them in tin foil for the last ninety minutes on the grill. Pig Night Run’s head chef, Jason Redding, served up traditional barbecue ribs with an emphasis on the garlic. Bad Boyz of BBQ’s Kirk Bronsord treated the judges to a Vietnamese rib seasoned with lemon grass, serrano peppers, fish sauce, and, of course, a lot of garlic. Myles McEntee, owner of Catering by Five, and his daughter took the first place trophy Friday with their Greek-style ribs amped up with garlic and herbs. 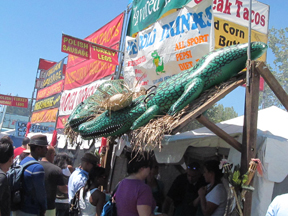 Hopefully, the show committee loved the barbecue competition enough to expand it next year. Even if they don’t, though, there’ll still be plenty to do at next year’s Gilroy Garlic Festival. If you want to see more, check out our photo gallery on our Facebook page.

Editor’s Note: Special thanks to Helen and Katherine Rossiter for handling photo duties on this story. I’m sure going to a huge food event and enjoying a full day of it in the sun was a hardship. Next time, I’ll send you some place colder…

*Feel free to use it next year, Gilroy. You’re welcome.