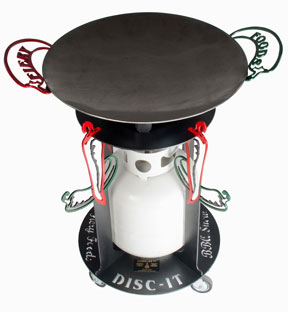 This Disc-It was custom made for the Fiery Foods Show. Propane tank not included.

To paraphrase Michael Corleone, “If history has taught us one thing, it’s that you can cook on anything.” Genghis Khan and his crew grilled on their shields over campfires, thus giving us Mongolian barbecue. People who crave the tang of gas fumes even use their car engines to cook food in foil. In northern Mexico, there’s cooking discada. That’s where you take a steel disc harrow (a plow-like farm tool pulled behind a tractor) and modify it by welding closed the hole in the disc’s center. Now transformed into a disco cooking tool, it can be used over an open flame in much the same manner as a Chinese wok.

Discada inspired Nevin Montaño to create the Disc-It custom propane grill. We’ll be running a full article on Nevin, discada and the Disc-It in the next issue of Burn! Magazine. Nevin has many cooking videos on his website, disc-it.com. For Mother’s Day, the dish du jour was Tony Garduno’s Mexican Fruit Salsa with Ice Cream. Not what you’d normally see on a wok, as fruit and ice cream are neither meat nor veggies.

Burn! Editor Lois Manno gave a great explanation about chile ristras (I told her to bring a hand puppet, but nobody seems to make ristra puppets.) Hey, I could be onto something…

You can see the Disc-It demo here: http://disc-it.com/blog/mexican-fruit-salsa/.

Editor’s Note: If you are not lucky enough to own a Disc-It, this recipe may also be cooked up in a conventional stovetop wok. The type of fruit used may be adjusted to what is available. Add a few sprinkles of cayenne or some diced fresh habanero pepper if you want to spice it up.

Turn the Disc-It to medium heat and cook the tortilla strips until they are brown and crispy—about 2 minutes. Place the cinnamon and sugar into a large plastic bag. Once the tortilla strips have finished cooking, add them into the bag, and shake well to coat.

Next, add the butter, brown sugar, rum, and orange juice to the Disc-It, and mix it all up. Stir in the fruit to give it a good even coating.

Remove the mixture from the heat, and serve over ice cream. Garnish it with the tortilla strips.