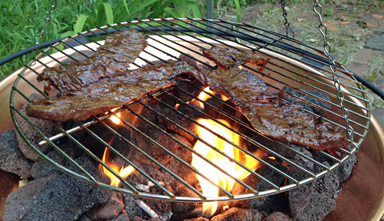 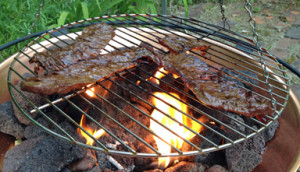 It’s a cool evening and you’re sitting in the back yard around a fire pit. Comfortable and romantic… but you’re hungry!

Can you cook on a fire pit? Sure you can. It doesn’t make any difference if it’s propane-fired or a traditional wood burning pit… cooking is cooking. And you can do a lot more than S’mores, hot dogs and hamburgers.

While my daughter and her husband have a traditional wood-fired pit at their New Hampshire home, mine is propane-fired. It’s a Del Rio manufactured by CampChef. The other evening I fired it up to just to watch the flames dancing in the pit while sharing time with the bride and some adult beverages. Then it was time to do some cooking! 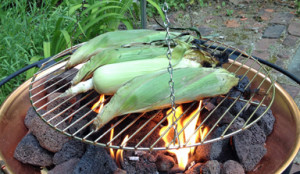 It was a simple dinner; Thai crying beef and roasted sweet corn. (Alright, I’ll admit it; I prepped the meal a few hours before). The other meal I did was grilled Maine lobster (after all this is New England).