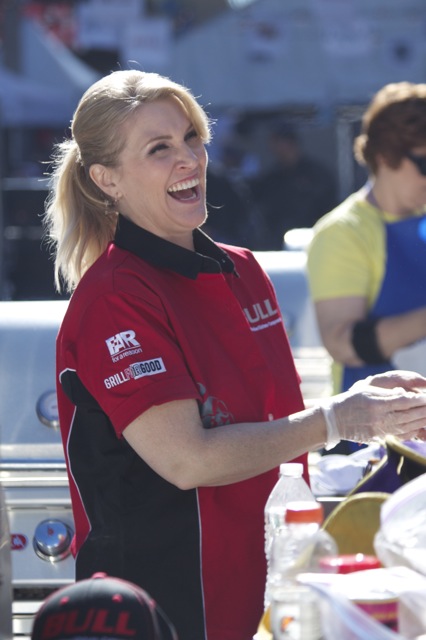 Each year, BULL Grills runs its Burger Battle competitions around the country. The events are a series of qualifiers for the World Food Championships in November. Kelly Lucas Shippey not only won last year’s BULL Grills San Diego Burger Battle, she judged this year’s event. That makes her a double threat for anyone looking for tips on what to expect. Here’s what she had to say when we picked her noggin.

BB: Tell us about your writing. Why the history end of the culinary genre?
KS: “Oh, well, that goes back to me being a complete history nerd. I didn’t love it in school but that came about when I saw my first first-person historical interpretation in Williamsburg, VA. We saw some reenactments. When we traveled for business, I sought out the historic locations where you can feel the past. Now, I seek out the kitchens for their ingenuity and resourcefulness. I love the Getty Museum to see the Roman and Greek stuff. Spanish vistas, adobe,it’s fascinating to me. How things changed, how we adapted as people, recipes changed, tasting the past. Food is a great way to connect with history and the past. If we experience things with our senses, we have a more memorable experience of them.” 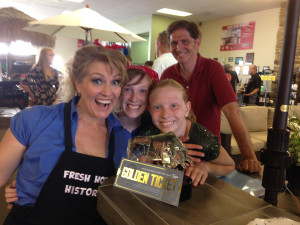 BB: How do you train up for a WFC qualifier? Fine tune a recipe?
KS: “First of all, you have to look at which qualifiers are coming up and which you want to enter. When the Burger Battle came up, I’d already been working on a burger for awhile and was fine tuning it. My inspiration was the stuffed jalapeno appetizer. I wasn’t doing it for the burger battle. I was working on one for a different contest. I’d made about five different versions before I was happy with it. Developing the recipe for that was coming up with the idea, then deciding it would be great as a hamburger. At first I roasted jalapenos in the oven and they were too spicy, so I went back to the drawing board. I had to perfect the spicy; balance the heat and not overpower the other flavors.”

BB: How does Team BULL work with the competitors that win its qualifiers?
KS: “Since BULL provides all the grills at the World Food Championships and you win the same grill used there, I got mine as fast as I could so I could practice on it. Other than that, there was no contact other than to get my information to get me my hotel room and travel. Even when you sign in, there’s no one there from BULL. I did get an extra bag that had me and my assistant’s shirts, tongs, spatula, and cleaner in separate swag bag. We didn’t see or talk to them until the reception.”

BB: How has the World Food Championships benefited you?
KS: “For me, it’s been great in that when I’m talking to people about it, it’s a really interesting fact that I can open a conversation with. It opens doors that way. I’ve been asked to judge, had a podcast interview. When I do demos, they want to know about Wprld Food Championships and historic cooking.”

BB: You’ve both won and judged WFC qualifiers. What were the most common mistakes made by the burger chefs you judged, and how would you have corrected them?
KS: “The number one thing I noticed was inconsistency in cooking in the meat. All the top ones had a perfectly cooked burger. Some were rare on one side, others crumbled and fell apart, several were burnt. Make sure your technique in cooking whatever you’re making is perfect. If you’re doing burger, make it a perfectly cooked beef burger. The ones that placed in the top all had the different tastes layered in the burger. Savory layer, thin creamy sauce, salty bacon, something that had a little acid in it. The one that won took red onions sauteed in balsamic vinegar. You also want layers of textures. One had layers of tortilla crisps and that was very pleasant. Practice a lot and have people over to taste it. The bun is very important. It should be toasted. Have a soft bun that’s toasted on the bottom so it doesn’t go to mush.” 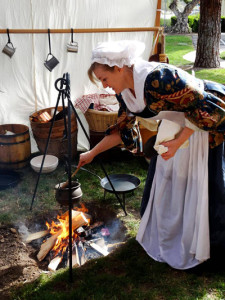 BB: Tell us about the dessert qualifier you won earlier this year. Why did you compete in dessert?
KS: “I decided to do dessert because that was the first qualifier that came up after the 2014 World Food Championships. I didn’t care what was coming up, I wanted back in. I already had a gourmet ding dong that I make. I thought, ‘Let’s see what I can do to amp it up to World Food Championships level, knowing what I know now about layering, flavor, and textures.’ In the end I went with chocolate ganache over the top of it, crunchy in center. I tried four or five versions until I found one that I felt I could take around the world and compete with this.”

Kelly’s website is Fresh Hot History. If food history is something you love, you’ll want to check it out.