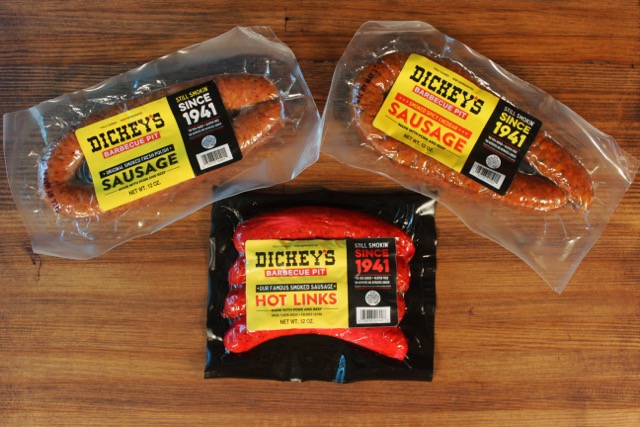 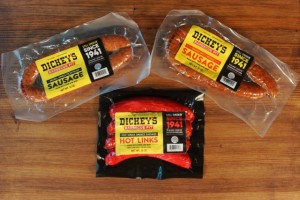 Usually when you hear “sausage” and “Walmart” in the same sentence, it’s a news story involving  a meth head going commando right before his arrest. In this case, however, Dickey’s Barbecue Pit is proud to announce its newest retail offering launching April 6 in 3,000 Walmart stores nationwide. Walmart will now carry three types of Dickey’s signature smoked sausage: Original Smoked Polish Sausage, Smoked Spicy Cheddar Sausage and Hot Links.
The new line of sausages from Dickey’s Barbecue Pit are high-quality, competitively priced and easy to prepare at home. All of Dickey’s sausages are gluten free, and contain no MSG or nitrites. They come pre-smoked and ready to heat and serve. After the initial launch in select Walmart stores, Dickey’s sausages will also be available in other grocery stores nationwide, with outlets to be announced at a future date.
During the launch, Walmart customers can find Dickey’s brand of sausages in easy to find bunker displays in many stores, which will feature the products prominently in the center of the frozen food aisle. The displays will also be featured during Memorial Day weekend, making it the perfect meal for a summer kickoff barbecue or gathering.
“We are proud to launch one of our signature barbecue products in Walmart stores across the country,” says Tamala Fowler, Dickey’s Vice President of R&D and Purchasing. “By offering our sausages on Walmart shelves, we are offering our guests yet another way to enjoy our authentic Texas-style barbecue at home for their summer barbecue or family gathering. We look forward to a long lasting partnership.”
Dickey’s sausages follow the recent retail launch of its signature buttery rolls in United Supermarkets, Jewel-Osco and Brookshire Brothers grocery stores in 2015.
To learn more about franchising with Dickeys, visit www.dickeys.com/franchise or call 866-340-6188.
To find the Dickey’s Barbecue Pit nearest you, click here. Find Dickey’s on Twitter, Facebook and Instagram.
About Dickey’s Barbecue Restaurants, Inc. Dickey’s Barbecue Restaurants, Inc., the nation’s largest barbecue chain was founded in 1941 by Travis Dickey with the goal of authentic slow smoked barbecue. Today, all meats are still slow smoked on-site in each restaurant living up to the company tagline, “We Speak Barbecue.” The Dallas-based family-run barbecue franchise offers a quality selection of signature meats, home style sides, tangy barbecue sauce and free kids’ meals every Sunday. The fast-casual concept has expanded to over 540 locations in 43 states. Dickey’s was recognized for the third year by Nation’s Restaurant News as a “Top 10 Growth Chain” and by Technomic as the “Fastest-growing restaurant chain in the country.” For more information, visit www.dickeys.com or for barbecue franchise opportunities call 866.340.6188.
The following two tabs change content below.