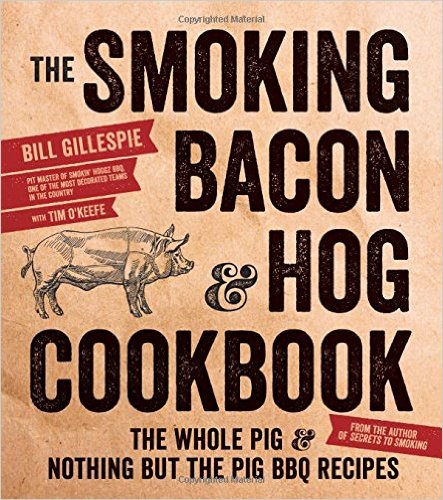 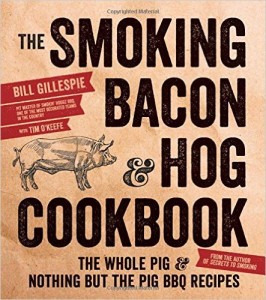 Y’all know I loves me the bacon. I cure five or six of flavors of my own of the stuff. Now imagine my glee when I opened the mailbox and found a review copy of The Smoking Bacon & Hog Cookbook. Much like the animal that sacrifices itself for my cured pork fix, I squealed. Only with joy instead stark of terror. That’s an important distinction.  What’s more important is the book’s treatment of one of the holiest of holies in the meat world: bacon. This book is as much about curing bacon as it is cooking with it.

Author Bill Gillespie is a champion pitmaster with both an American Royal Invitational (2014) and a Jack Daniel’s World Championship (2011) to his credit. He and his team, The Smokin’ Hoggz, have won a lot more competitions than that, but it’s safe to say those are the most noteworthy of the bunch. Bill originally intended this book to be solely a bacon cookbook but as often happens with fun writing, you just keep finding more and more ideas until the little bartender in your brain cuts you off from drinking any more creative juices.

For me, the real strength of this book isn’t the recipes using bacon, it’s the recipes for bacon. It’s sort of a sequel to the good work Michael Ruhlman started with his home-cured bacon how-to’s in Charcuterie: The Craft of Salting, Smoking, and Curing. Ruhlman’s book gives you a basic process for curing bacon and a few flavor ideas. Gillespie’s book expands the home baconer’s horizons with pages of recipes both for cured and uncured pork belly.

It also dives into subjects like sausage, chops, ribs, butts, and sauces. The guide to making a bacon weave was a great touch and using bacon as the tortilla on a breakfast burrito is definitely on my to-do list now. Overall I’d recommend this book for anyone interested in creating their own unique bacon at home and as an inspiration to really explore what’s possible when imagination meets grilling and barbecuing any sort of pork.