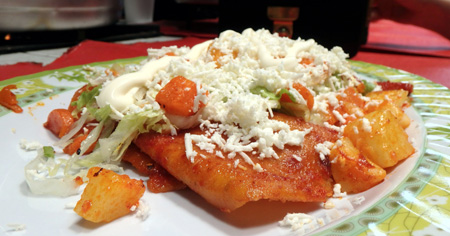 Story by José C. Marmolejo
“No es enchilame otra” states an old Mexican saying. Literally translated, “It’s not like make me another enchilada”, meaning that whatever you are requesting, it’s not as simple as making an enchilada. This popular wisdom is based on the fact that there is nothing easier than making an enchilada, and it’s true. 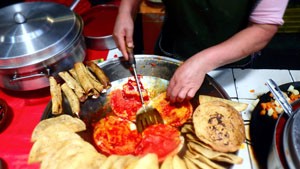 Red enchiladas being made at a market.

Enchilada is a short name for tortilla enchilada, which is nothing else than a tortilla covered with chile sauce on both sides, fried, then rolled or folded with no filling. That’s an enchilada, all right. Without frying, it’s is pre-Hispanic food, a tradition that remains alive with very poor people. A simple, economical and flavorful way to appease hunger and please the palate, soul food, that is. But somewhere along the line, someone decided that the humble tortilla enchilada should be fried and evolve into a more nutritional and sophisticated dish. It was decided that folded or rolled, it should have a filling. Cheese or chicken would be appropriate and this dish became popular among all income levels. How about beef enchiladas? They are popular in the U.S., rare in Mexico. Wild mushroom enchiladas? Well, I make them at home.
A tangent is needed here, however. It’s time to define a quesadilla. You will see further down why. Quesadilla is a folded tortilla stuffed with cheese that can be heated on a griddle or fried, until the cheese melts. In Central Mexico however, this statement will cause an endless discussion because in this region it’s stuffed with anything you can think of, cheese included. We don’t want to waste time on sterile arguments, however, so we move on. Now, a set of three quesadillas could be covered with a hot and fiery sauce or salsa, and Mira! Unas enchiladas! So, we have now another method of making enchiladas with any cooking sauce or salsa but without the splattering of frying a tortilla covered with sauce. 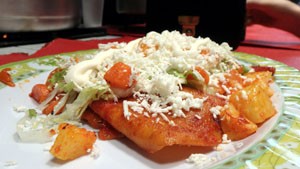 Red enchiladas with potatoes and carrots.

Often, we find enchiladas de mole in restaurants. These are fried quesadillas, folded or rolled, stuffed with cheese or chicken—your choice—covered with mole sauce. Few restaurants will call them enmoladas—a more appropriate label I think—and they are always a favorite. And you will find enfrijoladas also; as you can easily guess, they are fried quesadillas covered with bean sauce. And there are entomatadas,—quesadillas covered with tomato sauce, no chiles please—the universe is big, very big. 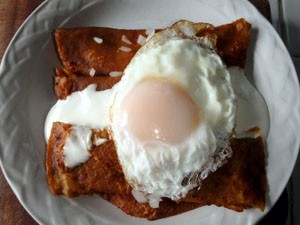 Growing up, enchiladas rojas were my favorites. For Don Alfonso, my father, that wasn’t real food or at least he didn’t consider them serious food. For him, a real meal had to have meat, so, enchiladas were some sort of a cheap amuse-bouche, but to me they were a treat. The best thing about enchiladas rojas at home was that my mother would make some extra that became leftovers, which the following day would be some sort of a mash, but reheated turned into a good casserole. It didn’t look as attractive as the day before but the flavor was better, the sauce had penetrated completely into the tortillas, the cheese had melted twice, somehow the flavor had matured. This practice gave way to enchiladas al horno. Inspired in the reheated enchiladas, my mother then decided to cut the tortillas in half, cover them in chile sauce, fry and arrange them in an oven dish with cheese in layers like we make lasagna. Guess what? The look surpassed that of the mash but the flavor did not. The reheat trick was the secret answer and needed to be done—and it was done. Anyway, it was fun to play with food, to experiment, to talk about fortunes and misfortunes of food ideas over coffee after a meal, but most of all entertain the spirit of our palate. 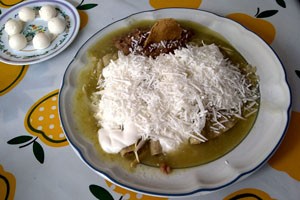 Green enchiladas with refried beans on the side

One day I was introduced to enchiladas verdes; this was before GMO’s. Tomatillos were small and tart. Sour cream was the fix. My palate adapted and I fell in love with enchiladas verdes. From a purist perspective, they should be called fried quesadillas covered with tomatillo and serrano sauce. Onion and garlic for sure. Heavy on the cilantro. Sour cream to taste. The frying before the sauce…
And we move into enchiladas suizas. Legend says that a gringo came to Mexico and wanted to try enchiladas but they shouldn’t be pungent. Enchiladas verdes were suggested. They turned out too spicy, however, for the visitor and the cook in turn “fixed” the “problem” spreading sour cream all over the green panorama. Another version of the legend says that the foreigner was from Switzerland, and knowing he would be sensitive to a fiery sauce, someone made him entomatadas with sour cream on top to resemble the colors of his flag. The far away visitor loved the plate and a new dish was born. From that day they were called enchiladas suizas or Swiss enchiladas, where the chiles were absent from the recipe. Should they still be called enchiladas? You decide. Today we even have sour cream enchiladas with little or no capsaicin, which I think should be called encremadas. So, enchiladas without chiles? I shall not touch them with my fork or my keyboard! In fact, last night I made some entomatadas, but I couldn’t help adding some red habaneros… 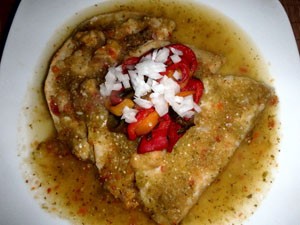 A versatile dish, today we find an infinite variety of enchiladas depending on the restaurant, the city or region, and the type of chile used to make the sauce. My favorite red enchilada sauce is made with ancho chiles, bitter for some, but I have a secret that I inherited from my mother, which I gladly share with you in the recipe below: Enchiladas Doña Luz. Provechito!!!

Enchiladas Recipes
Note: In making enchiladas, preparing the sauce first is recommended. The three recipes below require quesadillas. Make them with corn tortillas and cheese on a griddle, then fry them lightly. Serve and cover generously with the sauce. Top them with sour cream, chopped onions, roasted vegetables, more cheese, etc. Any enchilada sauce leftover will be great on top of fried eggs the following morning.

Instructions
Remove stems from anchos and cut them open. Shake off loose seeds, keep veins and seeds attached to veins, rinse. Boil the chiles for three minutes and let them cool off in the water. In a blender purée the chiles, fried tortilla, onion, garlic, orégano and salt with the help of the water where the chiles boiled. Look for a thick sauce but runny. The fried tortilla will help balance the bitterness of anchos. Boil the sauce 3 minutes and serve over quesadillas. Add sour cream and chopped onions.
Yield: 4 servings
Heat level: medium

Enchiladas Verdes
Can be found all over Mexico with no trouble and with no one claiming a patent on them.
Ingredients
12 Quesadillas
1 lb. Tomatillos
4 to 6 Chiles serranos
¼ Onion
2 Clove garlic
Sprig cilantro
Salt to taste
Sour cream to taste
Chopped onions for garnish
Chopped cilantro for garnish

Instructions
Wash the tomatillos with dish soap to remove natural wax. Remove stems from serranos, seed and devein optional. Using a blender make salsa with vegetables and salt. Save some cilantro for garnishing. Some water could be added to help the blending. Boil the sauce 3 minutes and serve over quesadillas. Add sour cream and chopped cilantro on top. Beans on the side? Sure.
Yield: 4 servings
Heat level: medium

Enchiladas de Chiles Poblanos
Fire roasted poblanos are a delicacy and a sauce based on them turns out refined and sophisticated. The best use of this dish is to impress your guests.
Ingredients
12 Quesadillas
6 Chiles poblanos roasted, stemmed and seeded. Devein if gringos are guests
¼ onion roasted
2 Cloves of garlic roasted
Salt to taste
Vegetable or chicken stock
Sour cream
Edible flowers for decoration

Instructions
In a blender, purée the poblanos, onion, garlic and salt with stock needed to make it a thick but runny sauce. In a pot with little oil heat the sauce. Correct for thickness with stock and check for salt. If the sauce turned out too fiery add some sour cream. Boil the sauce 3 minutes and serve over quesadillas. Squirt your signature with sour cream on top and garnish with flowers. Oh là là!
Yield: 4 servings
Heat level: medium