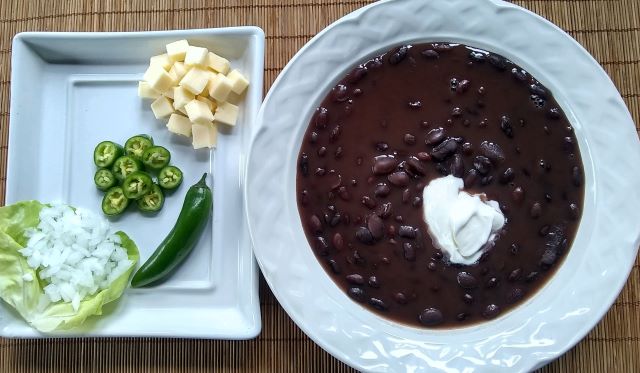 A clay pot with boiling beans covered by a deep clay saucer with hot water in it is a common fixture in the kitchens of Mexico. When the beans need more water, it is added from the saucer on top. It’s right there and it’s hot from the steam of the boiling beans. The saucer thus plays the roles of a pot cover and a hot water supplier, ever vigilant of the cooking treasure. This image was no exception in my grandmother’s and my mother’s kitchens. This is how beans are cooked and are called frijoles de la olla literally “out of the pot”. Once ready, they can be eaten immediately or they can embark in a journey toward frijoles guisados—which can take many forms—or ending as frijoles refritos or enfrijoladas or Sopa Tarasca. 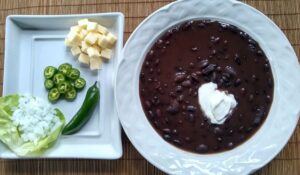 There are about 50 varieties of commercially produced beans and countless native varieties produced by sustenance farmers in Mexico. Tastes, preferences and climate, determine where and what varieties are produced and consumed among the different regions of Mexico. The annual consumption of beans in Mexico is around 22 lbs. per capita, an amount that makes beans a staple, and as we’ve discussed in the previous Milpa posts, one of the foundations of Mexican cuisines. Notwithstanding the diversity, my local dry beans supplier only carries regularly six varieties: negro de Veracruz, canario, bayo, flor de mayo, flor de junio and pinto. Buyers—mostly women—decide which one to buy considering only two factors: taste and cooking time. Six varieties in a store are enough to satisfy any local preferences. Wholesalers in Mercado La Merced or Central de Abasto, carry more varieties and some arrive in Mexico City only to be shipped somewhere else. Local consumption is thus limited to a few varieties. 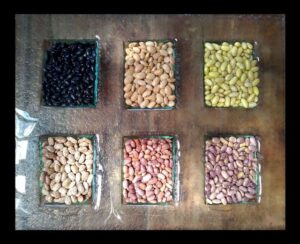 Frijoles de la olla are a delicacy in themselves, and if a few fixings are available they can be glorious. Look for my favorite prep of frijoles de la olla in the recipes below. Once beans are cooked, they can take many forms. After a day or two frijoles de la olla—whatever amount is left from the batch—can be fried to preserve them and give them a twist in flavor. Garlic, onions, chiles, and cheese could be added at this time; they remain watery and are called frijoles guisados. From here, immediately or after a few days, frijoles guisados can be mashed to a paste and fried again to obtain frijoles refritos. At this last stage, they can be served as a side dish or used as a spread on tostadas, quesadillas and the countless forms corn creations can take. Frijoles guisados can also be run through a blender to produce a sauce for enfrijoladas or to make sopa tarasca. The results of this versatile legume are endless.

Frijoles de la olla can also take what I call “the pork route”. By adding cooked pork and sautéed vegetables the result is a completely different dish. The delicious combination of beans and pork is an offspring of the marriage of Mesoamerica and European cuisines, where America provided the beans and Spain provided the pork. Frijol con puerco is an old tradition in the Yucatan peninsula—eaten on Mondays, don’t ask me why! Frijoles charros is a tradition in northern Mexico—recipe below—the side dish of choice in a carne asada. Other traditions include Cassoulet in France, Fabada in Spain, Feijoada in Portugal, and are expressions of what I think was a common situation: poverty and scarcity. Almost forgot two others! Pasta e Fagioli in Italy—Italian sausage added—and salt pork rich Boston baked beans should complement my point. All those dishes are beans and pork in principle, and if you go to a country that has suffered war, famine, or an epidemic you will find their own version of it.

If scarcity and poverty are the driving forces behind a pot of beans that had been transformed by adding whatever was available or leftover in the kitchen from previous days and boiled again or fried or refried, well, what a blessing in disguise those circumstances were!

In his book “El Arte de Cocinar con Chile”, Arturo Lomelí states that chile is “the soul of the Mexicans.” If this is the case then, what corn and beans are to the Mexicans? I think if chiles are the soul, corn must be the body and beans the mind… or vice versa?

Please note: in cooking beans, cold water should be avoided at all times. The rinsing and soaking should be done with hot water. To start boiling the beans, heat the water first then add the beans. When reheating, if water is needed add only hot water This will produce softer beans in less time.

This is where the beans universe begins. A good pot of boiled beans is a treasure that can be consumed as is or elevated to more complex concoctions. Here is my personal preparation method.

Instructions:
By hand, clean the beans of debris. Rinse them in hot water to remove any dust. Soak the beans in hot water for one hour in a covered container. Strain and begin boiling them using the 2 quarts of hot water. Boil the beans for one hour, then add the onion, garlic, epazote, and salt; boil for 10 more minutes. Check the beans for softness, boil longer if necessary. Serve the beans hot and add the toppings. Flour or corn tortillas or tostadas is the way to go. Good for breakfast, lunch and dinner. Provecho! 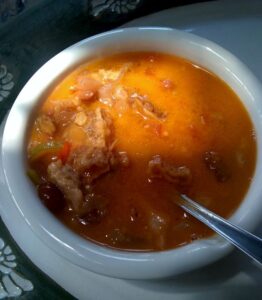 Simple and inexpensive to make, here is my personal recipe including my secret ingredient: lard! I hope yours turn out better than mine! 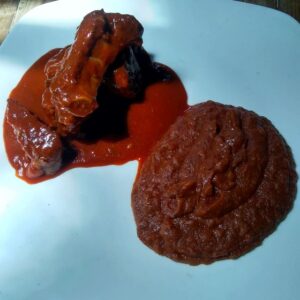 This is a dish frequently served in rural weddings in Northern Mexico. It’s basically pork cooked in lard and chiles, and has no relationship to carne asada or Argentinian asado.This dish produces enough flavored fat that we shouldn’t waste it. You can use it to prepare frijoles con veneno featured in the last recipe below.

Instructions:
Boil the chiles for 3 minutes and put them in a blender along with the onion and garlic. Using the water wherein the chiles boiled, run the blender to make a runny sauce. Brown the meat in the lard and add the chiles sauce. Bring it to a boil and simmer for 30 minutes. Add the salt, oregano, bay leaves, and cumin; simmer for 15 more minutes. Remove the bay leaves. Let the beans cool off to allow the separation of fat. At this time you can skim the fat you will need to refry the beans. Serve hot with white rice on the side and with frijoles con veneno, recipe below. 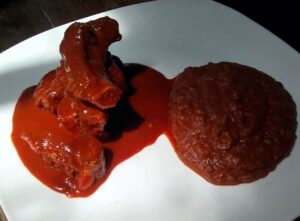 A favorite in the north of Mexico, this is a version of beans that I’m keen on. Literally, frijoles con veneno means “beans with poison.” While the name suggests danger, there isn’t, unless, like everything else, you abuse it.

Ingredients:
1 Lb. of frijoles de la olla per above w/o toppings
Fat skimmed from the previous dish, asado de boda

Instructions:
Mash the beans to a uniform paste and use the skimmed fat from the asado de boda refry them for 3 minutes or until hot. Enjoy!