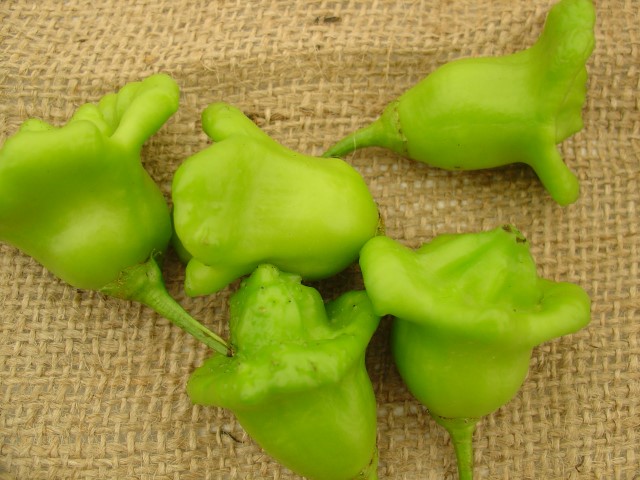 The C. baccatum species, familiarly termed aji throughout South America, originated in either Bolivia or Peru and, according to archaeological evidence, was probably domesticated in Peru about 2,500 b .c . Extensive C. baccatum material found at the Huaca Prieta archaeological site in Peru shows that the species was gradually improved by the pre-Incan civilizations. Fruit size increased and the fruits gradually became nondeciduous and stayed on the plants through ripening. There are at least two wild forms (varieties baccatum and microcarpum) and many domesticated forms. The domesticated ajis have a great diversity of pod shape and size, ranging from short, pointed pods borne erect to long, pendant pods resembling the New Mexican cultivars. One variety of aji, puca-ucbu, grows on a vinelike plant in home gardens. The C. baccatum species is generally distinguished from the other species by the yellow or tan spots on the corollas, and by the yellow anthers.

The baccatums are tall (sometimes reaching 5 feet), have multiple stems, and an erect habit, occasionally tending toward sprawling. The large leaves are dark green, measuring up to 7 inches long and 4 inches  wide. The C. baccatum plants tend to stand out in the garden like small trees. Their growing period is up to 120 days or more, and the plants can produce forty or more pods.

The flower corollas are white with distinctive dark green or brown spots; anthers are yellow or tan. The pods usually begin erect and become pendant as they mature, are elongate in shape, and measure
between 3 to 6 inches long and .75 to 1.5 inches wide. They usually mature to an orange red, but yellow and brown colors also appear in some varieties. The pods usually measure between 30,000 and 50,000
Scoville heat units.

The pods have a distinctive, fruity flavor and are used fresh in ceviche (lime-marinated fish) in South America. They are also used in fresh salsas. The pods of all ajis are dried in the sun and then crushed
into colorful powders.

We excerpted this little slice of information for you from Dave DeWitt’s Peppers of the World. You can pick up a digital copy of it and a library of Dave’s other books here.