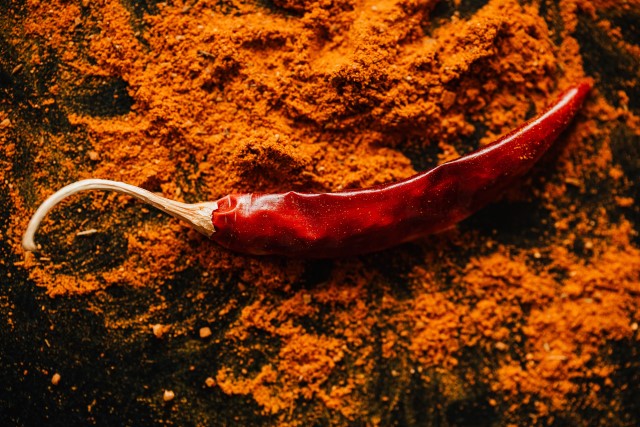 Rubs are essentially dry spice mixtures. A rub can be as simple as crushed black pepper, or as elaborate as a jerk or curry rub. Their purpose is to add intense flavor to the meat without adding excessive moisture. A paste is a rub with a little moisture—usually water, beer, or oil—added to bind it.
Generally speaking, rubs are used more with meat and poultry and pastes more with seafood. A notable exception to this rule is Jamaican jerk pork, which can be treated with either a jerk rub, a jerk paste, or in some cases (mostly outside Jamaica), a jerk sauce.

The most important thing to remember about making rubs is to use the freshest possible ingredients, not the ground oregano that’s been in your cupboard since 1986. Older spices and herbs oxidize, or turn rancid, and either lose flavor or gain a flavor you don’t want on your meat. Buy spices such as mustard, black pepper, cumin, and coriander in whole form and grind them yourself. The same goes for chile peppers—buy the pods, not the powder. Spices should preferably be fresh, but we’ve bought some
incredible dried Mexican oregano in bulk. Dry fresh spices in the microwave and then crush them in a mortar.
You can use a spice mill, a coffee grinder, or a mortar and pestle to make the rubs, just remember not to grind the mixture too finely. The friction and heat o f the grinder motor can make the herbs and spices release too much o f their essential oils.
Rubs— and particularly pastes— do not store very well. If you must store a rub, put it in a small jar with a tight seal and place it in a cool, dry cupboard, or in the freezer. Oxygen and light are the enemies o f a rub. Pastes can be stored for a few days, though only in the refrigerator. Dry rubs are massaged into the meat or poultry, which is then lightly covered and allowed to sit for as little as a half hour, or as long as a day. When using pastes on seafood, completely cover the shrimp or fish or whatever with the paste, then wrap tightly in plastic wrap to more fully infuse it with flavor. The same technique works with pastes applied to meat or poultry.
Debates continue to rage about the use of rubs in the barbecue process. Some people state that the rub seals the meat, keeping the juices in, but others warn that salt in the rub will draw the juices out, and they will evaporate. (Note that most rubs have a little salt in them.) At least one home physicist theorizes that the dryness of the rub attracts moisture from the air and actually adds it to the meat, but this is doubtful. Barbecue writer Richard Langer explained that “a rub draws a portion of the juices from a cut of meat to the surface, there to mingle with the seasoning and form a crust encasing the rest of the meat’s juices and flavors.”
Ha! Food chemistry expert Harold McGee counters: “Any crust that forms around the surface of the meat is not waterproof.” In the end it seems that if we use food common sense and don’t add additional salt before smoking and don’t worry about moisture loss—smoked meats are supposed to lose moisture as they tenderize—we can assume that rubs add flavor and help make a tasty crust, or burnt ends, as the barbecuers call the crust on the thin end of the brisket.

Editor’s Note: We lifted this excerpt from Dave DeWitt’s Barbecue Inferno book. Pick up a digital copy of it here for lots of great ideas and insights.

Photo by Karolina Grabowska from Pexels
The following two tabs change content below.