If you’d split the State of Sinaloa in two, the north half would face the Sea of Cortez while the south half would face the Pacific Ocean. Known as the “Aquarium of the World’,” the Sea of Cortez—with slightly warmer waters than the Pacific Ocean—is a sanctuary to many species, some in danger of extinction, and it is also a winter breeding and birth site for humpback whales. Biodiversity in these waters is one of the largest in the world feeding birds, mammals and humans. Fish, crustaceans and mollusks found in these waters thrive, its abundance plus its variety is overwhelming. This makes Sinaloa a national leader in the production of shrimp, tuna, sea bass, crabs and shark among other species. The yearly value of the fisheries industry production in this area is around $500,000 000 USD. 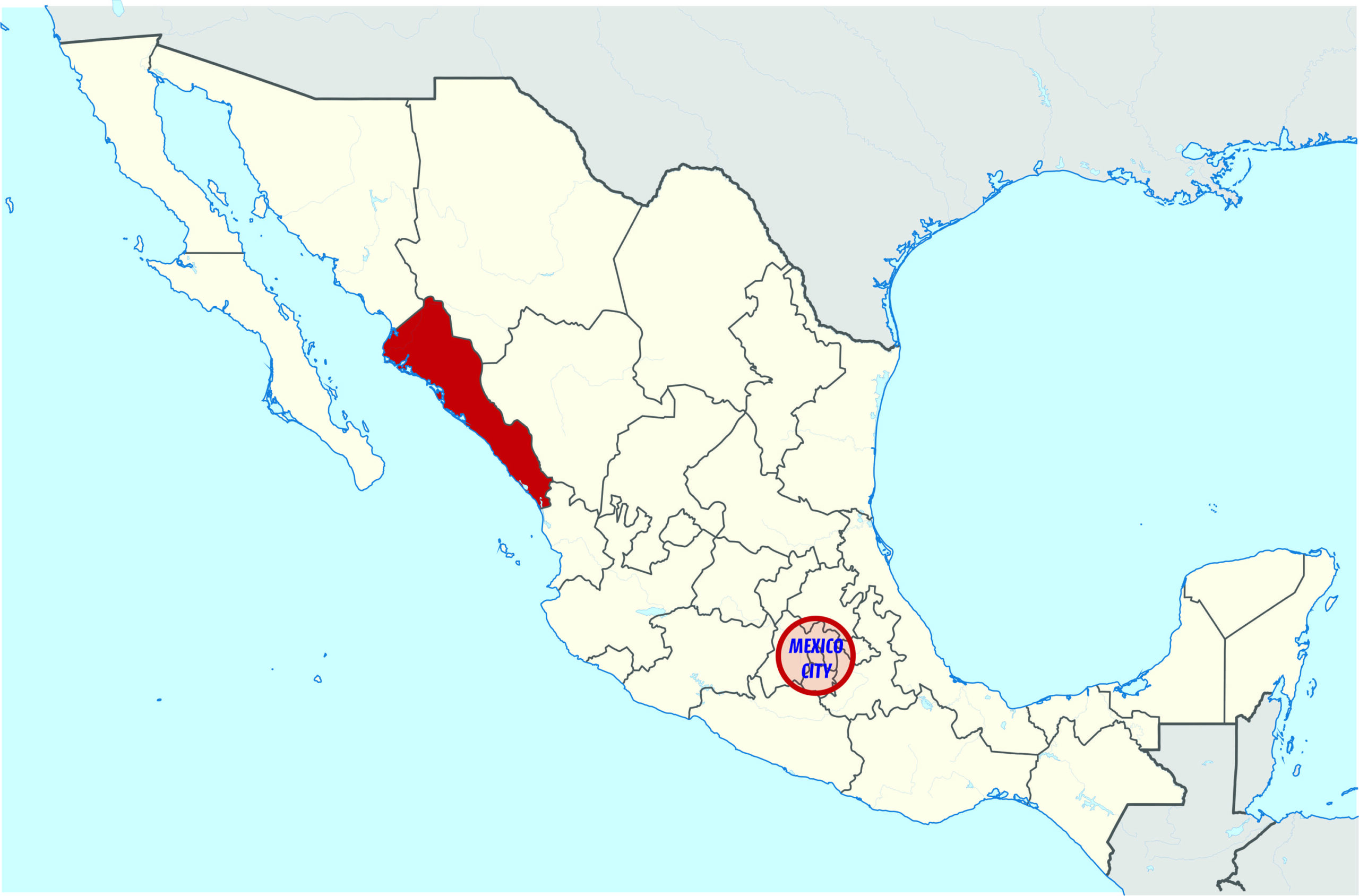 The land in Sinaloa is remarkable too. The northern limit of the state lies below the Northern Hemisphere “desert belt.” Sinaloa seems to have been blessed with privileged land when the states were formed. Abundant rainfall and moderate temperatures year round give way to lush vegetation and fertile soil. This geographic arrangement makes Sinaloa the largest producer—and exporter—of tomatoes and other vegetables, and a prominent beef producer.

Growing up in the semi desert of Northern Mexico, my trips to the beach in Mazatlán were equivalent to a trip to Disneyland. In the `60’s, it took between 10 and 12 hours to drive the 310 miles that separates Mazatlán from Torreón, my hometown. There was no flight service for this route, so we had to drive. The two lane steep and sinuous highway that crossed the Sierra Madre was always crowded with automobiles, buses, and trucks which made overtaking them almost impossible. So you sat there all day watching the landscape from the window´s vehicle. From the arid land with brown bare soil and dusty shrubs at 3,600 ft above sea level (ASL) passing by Durango City, we climbed the Sierra Madre where the vegetation changed to beautiful pine forests up to 8,500 ft ASL. What a treat! And as we descended into the coastline, tropical vegetation filled the view. The long drive was finally rewarded with a magic vista of the blue ocean. I loved arriving in Mazatlán and always wondered why we didn’t move to the beach. Today a half an hour flight does the job or you can drive in six hours or less thanks to toll roads and a new route with bridges and tunnels, including the spectacular 3,688 ft long cable-stayed Baluarte bridge that links Sinaloa with the State of Durango. This is the highest bridge in the Americas, rising 1,322 ft over the Baluarte river. This road continues to be impressive. 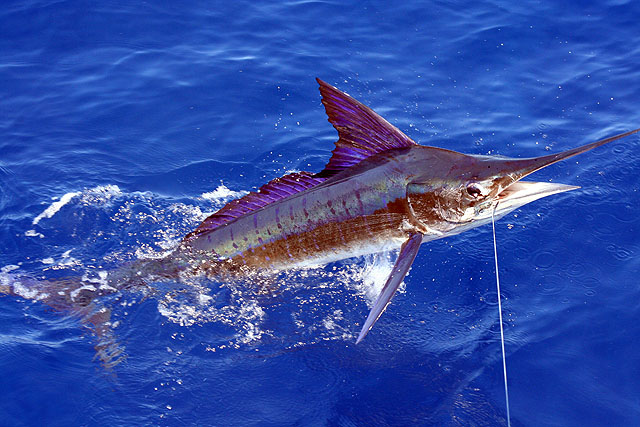 The gastronomy of Sinaloa is the product of its biodiversity and the creativity of its people. An array of ingredients and ideas have originated a cuisine rich in protein and vegetables. Aguachile, chilorio or enchiladas del suelo are among the best known dishes representing Sinaloa food, however there are enough regional seafood dishes to fill a cookbook. This wonderful seafood tradition started on the streets with carretas, humble wagons that were rolled daily from the vendor´s house to the place of business. Those were the spots that sold the freshest seafood in town with the lowest prices to standing room only customers. The recipes were developed by the vendors and over time the dishes became the Sinaloa gastronomic signature. The success of the first carretas led to its multiplication and to the opening of restaurants formally established where families could sit around a table, be served and celebrate life with the treasures of the sea. “Los Arcos” was one of those restaurants. Established in Culiacán in 1977, successfully grew and branched out of the State, flying fresh ingredients all the way to Mexico City and other major cities in the country. It became a well known Sinaloa trademark in northern and western Mexico and continues to be the leader in authenticity and quality.

As it happens with all famous dishes, Tacos Gobernador—created by Los Arcos—has its own story. In late 1986, Francisco Labastida, at the time candidate for Governor of Sinaloa, showed up at the Mazatlán branch and wanted something “light”. He and his wife were directed to the kitchen by Armando Angulo, a member of the family that owns the chain. Mr. Labastida suggested adding shrimp to a quesadilla they were preparing, the combination worked. The following year Mr. Labastida became Governor of Sinaloa and the restaurant named the improvised creation as Tacos Gobernador. Today it is a registered trademark owned by Los Arcos. If you are in Sinaloa try the seafood of a street carreta—most likely it will not have wheels anymore—but if you are in a major city in Mexico in the mood for excellent seafood look for Los Arcos. Both options will be satisfactory and an excellent real Sinaloa seafood experience. Buen provecho! 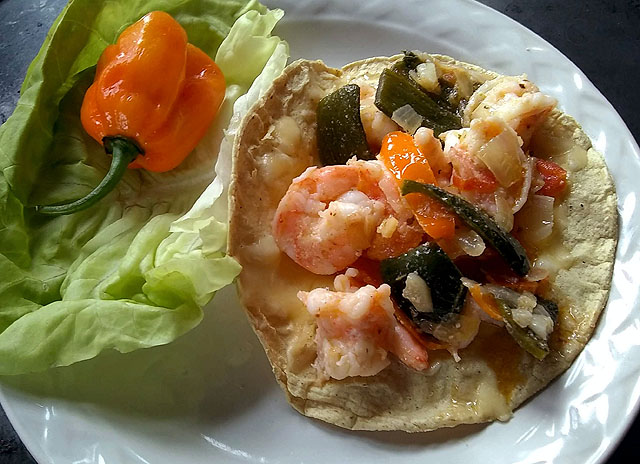 This recipe is my interpretation of Tacos Gobernador, a registered trademark of Multiarcos S.A. de C.V. I´m not a fan of mixing cheese with seafood but I have to admit that in this case it works. The magic for me though came from the habanero flavor. 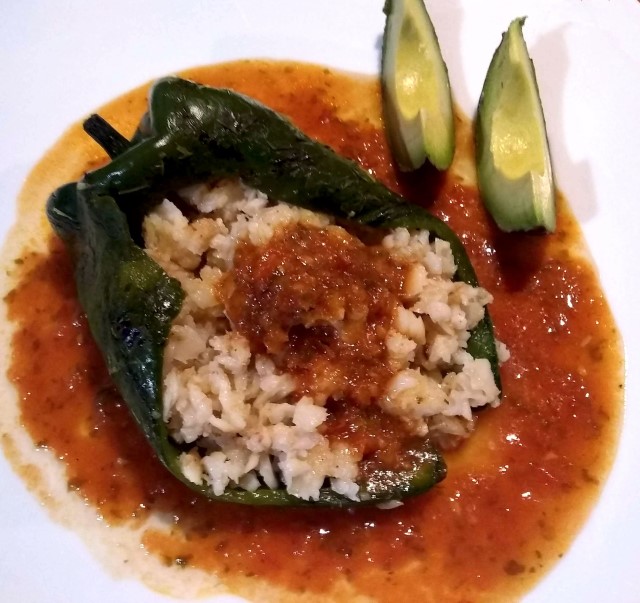 The delicate flavor of crab is preserved by cooking it on butter with little condiments. The combination with chile poblano topped with a mild salsa is a real treat. 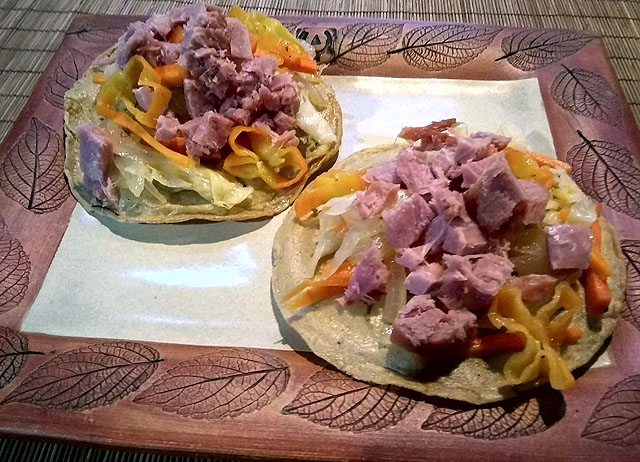 A versatile dish that can be prepared with any smoked fish and served cold or hot, on tostadas, as a side dish or main course. High in fiber and protein rich, it could be a healthy appetizer or a complete meal for a hot summer afternoon or used in celebrations as they do in Sinaloa. 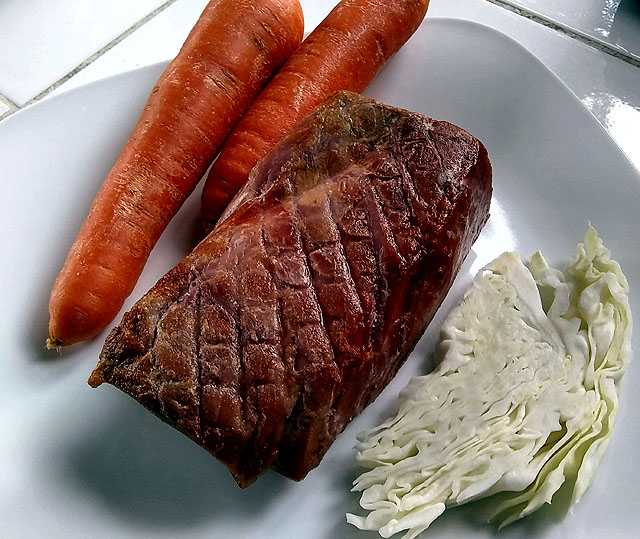