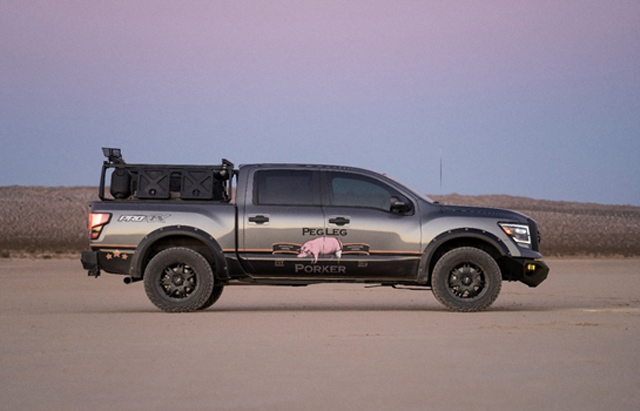 Today at the 2021 SEMA Show, world-renowned Pitmaster and Tennessee’s Peg Leg Porker BBQ owner Carey Bringle proudly showed off his uniquely modified 2021 Nissan Titan Pro-4X that was revealed to him earlier this week. A custom truck designed to make Bringle’s trophy winning ways effortless with a multitude of BBQ inspired modifications. Modifications that make it easier for Bringle to his access custom barbecue tools, burn box, increase his visibility for cooking and so much more. The end result is a spectacular, one-of-a-kind build. An award-winning build team tackled the job with ease and a dozen plus aftermarket off-road companies came together to create a complete BBQ grillin’, customized Titan. Carey Bringle has been competing in barbecue contests for more than 27 years, and he has the blue ribbons to prove it. The Nashville native deep southern background was built around family values and appreciating a good meal. It’s a great foundation for the excellent barbecue he makes both in competition and at Peg Leg Porker, the barbecue restaurant that bears that name. Peg Leg Porker takes its moniker from Bringle himself and his greatest victory: a cancer battle that he won at the age of 17. The fight cost him a leg, which led him to name his new restaurant and only added more fire to his passion for success.

Since opening its doors in 2013, Peg Leg Porker has distinguished itself as one of the top barbecue joints in the country. It’s appeared in outlets like Food Network, The Travel Channel, BBC, Southern Living Magazine, Texas Monthly, GQ, Garden and Gun Magazine and many more. Carey himself has also has been featured in dozens of national television shows, including a pilot show on The Food Network, Barbeque Brawl, The Food Network’s Chopped, Grill Masters, Bizarre Foods America, BBQ Crawl on the Travel Channel, and Hungry Brothers on TLC. Additionally, he has been invited to be the featured chef at Hogs for the Cause in New Orleans, on several occasions, which benefits pediatric cancer research — a cause very dear to his heart. Carey’s zest for life and sense of humor is reflected in his signature Peg Leg Porker brand.