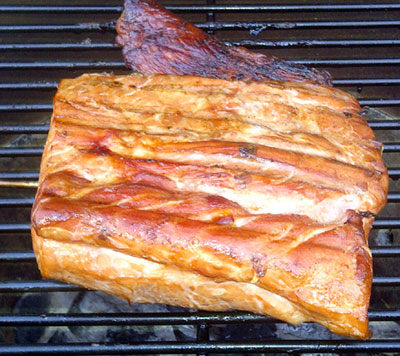 OK… I’ll admit it! I’ve been bitten by the bacon bug. A few weeks ago I smoked pork bellies to make bacon (“streaky bacon” for those north of the U.S. border or in the U.K.). After doing that, I decided to try making the American version of Canadian bacon.

What is called “Canadian Bacon” in the U.S. is not the same as the Canadian bacon made by Canucks. In Canada, the cured pork loin is rolled in fine cornmeal before frying and is called “pea bacon” because it was originally rolled in crushed, dried peas before cooking.

Unlike bacon that comes from the pork belly, Canadian bacon is made with trimmed pork loins or tenderloins. It is traditionally wet-cured (although it may be dry-cured) while belly bacon is usually dry-cured by home cooks. (Most supermarket bacon is wet cured by injecting the bellies with a curing solution.)

Making Canadian bacon is not difficult but it does take some time for the pork to brine before smoking. The end result is definitely worth the work, so just give ‘er, eh? 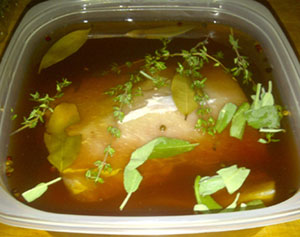 Pork soaking in brine with seasonings


Remove any fat and silverskin from the loin. (The trim weight will be about 2 3/4 pounds.)

Combine all the ingredients except the pink salt in a non-reactive saucepan and bring to a simmer. Stir until the salt and sugar is dissolved. Remove from heat and cool to 40 degrees F. Add the pink salt once the brine is cooled; stir well to dissolve. 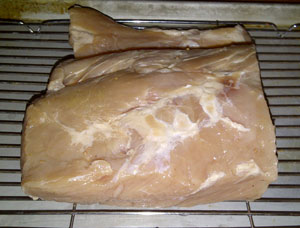 Pork loin ready for the smoker

Using a kitchen syringe, inject the pork loin with the brining solution (generally speaking, you want to inject 10 to 15% of the raw weight with the brine solution). Place the injected loin in a re-sealable food bag or a large nonreactive container. Cover with the remaining brine and refrigerate at least five days or up to seven days, turning every day.

After brining, soak the loin in cold water for at least one hour, changing the water every 30 minutes. Pat the loin dry and refrigerate, uncovered, for one or two days to allow a pellicle to form. (A pellicle is a slightly tacky, thin, lacquer-like layer that forms on the meat, allowing for better smoke absorption. It also helps the meat retain moisture during cooking.)

Remove the loin from the refrigerator and season liberally with your favorite pork rub or Cajun seasoning. My recommendation is 1/2 ounce of rub per pound. Bring the loin to room temperature.

A perfectly-smoked slab of Canadian Bacon

Prepare your smoker for cooking at 225 degrees F., using apple and sugar maple wood (or whatever wood you prefer; I would not use mesquite or a heavily flavored wood). Smoke the loin to an internal temperature of 150 degrees F. (about two hours or so depending on your smoker temperature). Remove the loin from the smoker and allow it to cool for at least 30 minutes before slicing.

After smoking, the loin I prepared weighed in at two pounds, five ounces so there was a four ounce loss during smoking.

Pan-fry or oven-roast the slices to your desired degree of doneness (you don’t want to overcook the bacon). The sliced, uncooked bacon may also be frozen between sheets of waxed paper and wrapped with plastic wrap for up to six months.