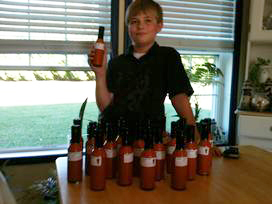 The next time one of my friends complains about how tough it is to start a business, I’m going to shut them up with the story of Nolan Bebber. He’s a thirteen year old in North Carolina who’s created his own line of hot sauces in four flavors, all of which are his own recipes. Nolan sells all of them online at his website, nolanshotsauce.com.

The young Food Network fan makes four flavors of sauce—Tongue Scorcher, Desert Scorcher, Green Fire, and Asian Dragon. That’s a pretty long run from the day his father Michael and mother Joy loaned him $56 to get started. His business turns a profit and he ships his products all over America. Although running his own hot sauce operation is a real time eater, he still makes great grades in school. Maybe next year we’ll see him at the Fiery Foods & Barbecue Show.

Here’s what St. Louis, Missouri-based blogger and chilehead sauce reviewer Scott Roberts had to say after sampling Nolan’s sauces: “I must say that every single one of them has potential; some more so than others, of course. Although I at no point handicap him for his age – I treat and review his items as would any other budding sauce maker – I have to say that I am generally impressed by what he’s come up with for just becoming a teenager a scant couple of months ago.” You can read Scott’s complete review of Nolan’s Hot Sauce (and many other spicy products) on scottrobertsweb.com.