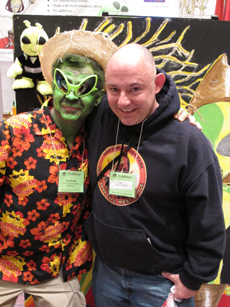 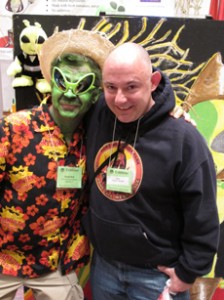 Posing with the resident alien from Martian Salsa. I'm the one on the right.

Some of you may remember what went down when I went to last year’s Fiery Foods & BBQ Show. The voyage of discovery, the 100 pounds of bacon we cured and smoked for the big dinner at El Pinto…

Very well, show, you won the first round. Basically, morale broke about three seconds after the salsa sent my tongue into a burning fit. I set a landspeed record making a bee line to the 94 KZRR radio booth, where I snatched up a cup of chocolate ice cream, tore off the lid, and plunged my tongue into it while groaning. I was that much of pepper newbie.

This year, I didn’t care what happened: no way I was repeating that experience. That salsa was the Clubber Lang to my Rocky Balboa. I spent the last year sampling all kinds of spicy heat.

When I got to the show on Friday, I felt ready to face the enemy. I was pumped, I was tanned, I was ready. After I checked in to my room at the Sandia Resort & Casino, I made my way downstairs to see what Dave and Lois needed me to do for the day. For exhibitors, the hours before the general public floods the floor are the best time to walk around, talk to each other, and buy stuff. Lois and I shot the first in a series of video interviews we conducted throughout the weekend. You’ll see them later on after we edit them down. Friday went well. I mad dogged my arch enemy a few times, put in some work, and felt ready to go for Saturday.

It’s a good thing I did most of my show shopping Saturday morning. Nothing, I mean, nothing, prepared me for the record attendance we experienced that day. It was actually pretty awesome. Everyone who worked the show did a great job managing the flooding human molasses that was the crowd of visitors sampling wares on the floor all day. The biggest crisis of the day was running out of little tasting spoons for the vendors, but a few well-placed bribes at the local Ecco Gelato, Cold Stone and Baskin & Robbins in Albuquerque took care of that.

Sunday went pretty much the same way, although attendance was noticeably lighter. I took some more photos, then, in the afternoon, I faced my rematch with the Scorpion. This time, it took me a whole minute to start heading for the ice cream, at a brisk walk, no less.

You ain’t so tough, Scorpion.