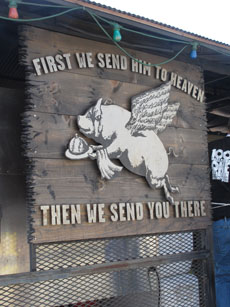 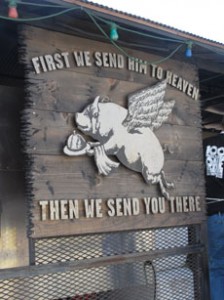 (Written by Georger Hensler) A walk through the rows of teams at any of the hundreds of barbecue contests held throughout the country can be quite an eye opening adventure, particularly to the inexperienced. It goes without saying you will be quite amazed at the shapes, sizes, and styles of the many cookers being used by the teams to prepare their products. You’ll see everything from a huge professionally made unit to a 55 gallon drum converted into a smoker in someone’s backyard.
Another issue that will become obvious to the astute observer is the clever and humorous use of animals and innuendo on the banners and logos of the various teams which are participating. The most popular members of the animal community found on the various signage are the cow, the pig and the chicken, for obvious reasons. You’ll see them driving cars, wearing suits, chasing, cooking and eating each other as well as doing many more wild and crazy things all in the interest in promoting their various teams and having a good time.
For the most part, it’s nothing but good clean fun. Who can argue with that? Outdoor cooking and good times go together like peas and carrots or better yet, like hotdogs and buns. In other words, they were made for each other. 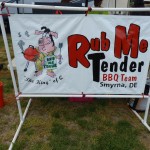 Here is a great play on words inspired by one of Elvis’s classic hits. Notice the use of the word “King” as well as the hair and suit worn by the attendant guest grill master. 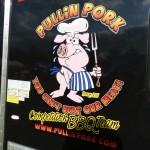 Here we have a great example of a member of the swine family that looks as though he may have been caught in an embarrassing and or compromising situation. If you’ve ever raised a teenage boy, you know exactly what we mean. 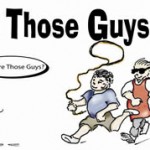 The article wouldn’t be complete without a bit of shameless self-promotion now would it? That being said, I give you my team’s logo. We made full use of the requisite barbecue animals, less the cow. What you can’t see is the: No animal was harmed unnecessarily in the creation of this BBQ team. The chicken and pig depicted on our banner are professionals and were only acting; they were not harmed in any way. The chicken is actually from Street, Maryland and the pig knows damn well who we are.” 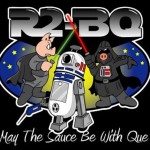 “These aren’t the ribs your looking for.” This New York-based team apparently multi-tasks as sci fi geeks. Mashing up a droid and a bullet smoker was a great touch. 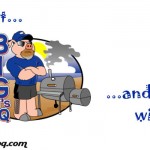 Here we have a snappy example that can be taken in any number of ways. Is there symbolism present? If so, what does it mean? I don’t know what our ole buddy Sigmund would have to say about this, but in my humble and uneducated opinion, I would say this one is a winner on all fronts! 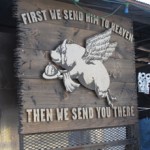