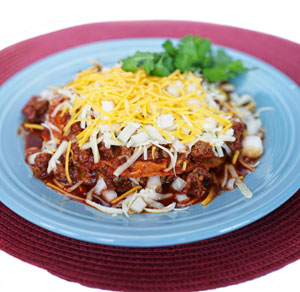 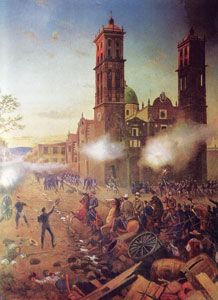 This painting depicts the Battle of Puebla—May 5, 1862.

May 5 is Cinco de Mayo, and you don’t have to be Mexican or of Mexican descent to celebrate. Contrary to popular belief, May 5 is not Mexico’s Independence Day; rather, it celebrates a triumph for the small Mexican army over large French forces at the Battle of Puebla on May 5, 1862. The battle marked a turning point in the French occupation of Mexico and helped instill a fierce sense of national unity and patriotism that is still present in Mexico today.

While Cinco de Mayo is not a prominent holiday in Mexico (it’s primarily celebrated in the state of Puebla and along the U.S./Mexico border with feasts, fiestas, and parades), Cinco de Mayo represents a day of pride for those of Mexican heritage living in the United States.

Traditional dishes that are served up on Cinco de Mayo include sangria, a red wine and fruit-based drink, enchiladas, chiles rellenos, and desserts such as dulce de leche cake and traditional Mexican flan (creamy egg custard).

Whether you want to show your support for Mexican heritage—and the large contribution Mexican culture has made to the melting pot of the U.S., or if you’re simply looking for an excuse to whip up sangria and enchiladas, Cinco de Mayo is a holiday worth celebrating!