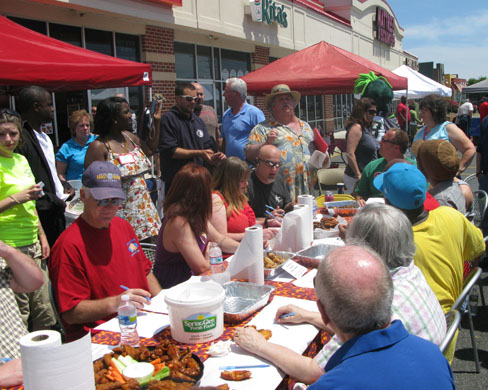 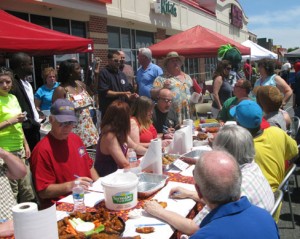 A lot of three year “growth problems” are cured with antibiotics or bleach. Not this one. Peppers at the Beach turned three this May and creator/promoter Chip Hearn’s biggest growing pain comes from keeping the event small enough to retain its tailgating feel. So many chefs wanted to compete that he actually had to turn some away.

Peppers at the Beach is an East Coast celebration of spice and hot peppers with a healthy dose of competition thrown in. It takes place at Rehoboth Beach, Delaware. This year, it ran from Friday, May 18th to Sunday, May 20th. Since it kicked off in 2010, it’s grown to 30 chefs, then 60, some of which have featured prominently on Food Network. This year, Steve “The Machine” Smallwood chased down the Guinness Book of World Records title for eating the most Bhut Jolokia peppers in one minute. Chip Hearn gave us the low down of the festivities.

Burn!: How did the event series get started?
CH: “A lot of the chefs come down every Saturday and Sunday. John said we need to have more fun. While we’re doing our demo, we’d have five or six other guys come down and do demos tailgate style. They came down, talked to customers; we had ten simultaneous demos. The media went nuts over it talking to the attending Food Network chefs. We can’t get any bigger because we want to retain that tailgate atmosphere. We had 30 some chefs last year and 60 some this year that we had to turn away. It’s not about selling sauce so much as tailgating and having fun.”

Burn!: What was the best part this year?
CH: “All of the people going nuts for the hot pepper ice creams. Guys were hilarious eating them.”

Burn!: What will you do different for next year?
CH: “What you find every year is that some things don’t work. We’ve got to tighten up the concept so that everyone knows what they need to do while they’re here—talk to the media and customers, that kind of thing. We’ll really tighten up on that. Second thing, the contests. They’re great but hectic. So many people wanted to get involved and the events took place one after another. That made entries hard for the judges to handle. Twenty judges had to eat 30 wings and judge them. Keeping the food hot was problematic too (laughs). It’s all about using the chefs effectively. We’ll have them carry around the trays themselves. Wings aren’t just from Buffalo anymore and we teach people how to make them differently If I do that, I’ve done my job.”

Burn!: How crazy did the food get?
CH: “I was hoping 2-3 outfits would go wild with their presentations but 20-30 of them did. There were all kinds of wild recipes and presentations. The cheering and screaming was going wild. When Guinness is involved, people go wild. They say this is history. I know it sounds stupid but it’s true. This guy Steve “The Machine” Smallwood is everything they say he is and he crushed the world record. Everyone was screaming ‘USA! USA!’ because he was beating a German record. I think Guinness being there made it big in and of itself. So many wild things were entered that peanut butter and jelly wings won and we had two other recipes with peanut butter in them. We even had chicken sushi. How wild is that? It doesn’t exist!”

Burn!: You must have burned through a lot of chicken!
CH: “During the 3 day period, people ate 20,000 wings. And every single one was eaten. It was fantastic. To help, two of the teams (Ole Ray’s and Texas Rib Rangers) cooked the wings with their smokers and gave wings away to the sauce guys to use in the contest. A lot of guys had teeny cookers that couldn’t handle the volume. They cooked 6000 at 7 am Saturday and kept handing them out. There were a lot of guys who only entered one contest originally. They ended up competing in 2 or 3 because we had extra wings.”

Burn!: What do you see for it in the future?
CH: “I’d like to make the days different. Bloody Mary day, wing day, and something-else-day. It’s all about fun food. The Bloody Mary guys wanted a virgin day and I think that’d be fun as heck. Or we might spread the contests on different days. We did them all in one day this year so the media knew when to be there.”

Burn!: What do you want mentioned?
CH: “The key is to mention hot sauce from a national standpoint. These sauces are so diverse now you can come up with wild flavors. It’s really different from even 7 years ago. The different foods cooked by the chefs—elk, snake, other stuff these chefs did outside the box. When you see a contest, it’s who can eat the most. Ours were who could eat most the fastest. The mild and nasty ghost wings were fun. These new contests are different. We’re seeing who can eat 12 or 20 wings the fastest instead. It was a real blast to see all of these different nationwide styles. We had 3 guys signing books and customers loved that.”

For those of you who’re a little extra curious, here are the contest results.