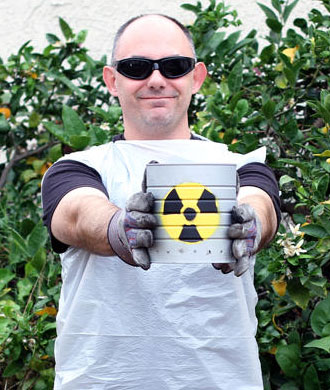 I love the smell of napalm in the morning—as long as it’s not coming from my steak.  Unfortunately, charcoal starter fluids tend to add a distinct hint of gasoline flavor to grilled meat.  That’s why there are chimney starters.  They’re basically metal tubes into which you lay a bed of crumpled paper scraps, then fill the rest of it with briquettes  or wood charcoal.  Then you just set the paper on fire and the resulting heat in such a cramped, sheltered environment does the rest of the work for you.

Weber Grill makes a great fire starter—it runs for about $8.99-$14.99, holds a lot of coals, has a nice big handle, and sports a cone-shaped internal coil to aid in lighting.  But if you’re the proud owner of a cordless drill and a coffee habit like me, you can have your own chimney starter for under $5 and you get a ton of java to boot.  How?  By making your own starter from a metal coffee can.

Cutting a few holes in a coffee can is easy, but hardly cool.  I upped the ante with a little paint. 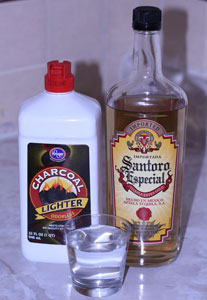 Two accelerants—one for the fire, one for the chef.  Both tend to leave a bad aftertaste if used improperly. 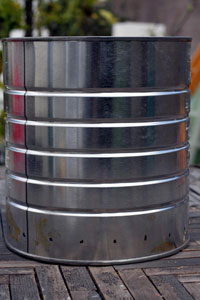 First, I ran a tape measure around the bottom of my can (the tin one, not the one raised on too many french fries).  I made marks at one inch intervals all around for ventilation holes, then got to drilling. 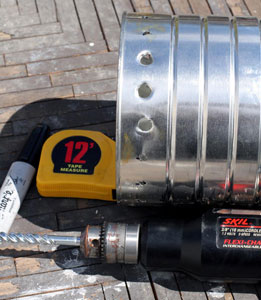 Ten minutes later, we were ventilated.  I made three of the holes bigger than the rest so I could snake a lighter wand into them for lighting the paper on fire. 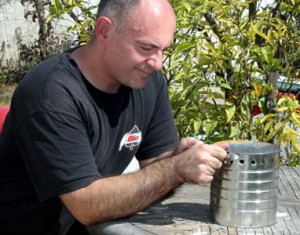 Next, I took a can opener to the bottom of my would-be chimney starter.  The reason I left it on while drilling the holes was to keep the coffee can from bending while I press on it with the drill.  Once the bottom is off, you’re basically done.  Time to drink off that pound of ground coffee and fire up the grill before the shakes set in, right?  Wrong!  I thought it’d be cool to personalize my starter with some heat-resistant spray paint.  I laid down some matte silver barbecue paint, then added a radiation hazmat symbol using the same procedure in my trash can smoker article here. 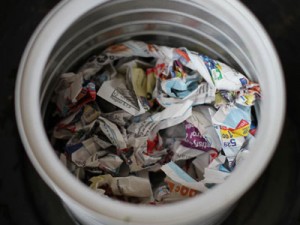 Satisfied with my paint scheme, I put the starter to the test.  Here it is, with a nice layer of mailer ads at the bottom, roughly an inch high.  Time to pour in the coals and heat it up. 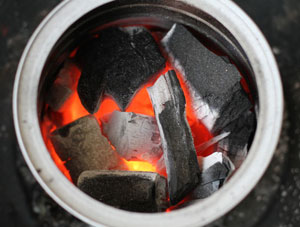 I made a layer of smaller chunks to act as kindling first, then filled it to the brim with medium-sized charcoal.  Paranoid sort that I am, I held the lighter to the paper until I got a good smoke going with the paper.  A few minutes later, my ears were rewarded with the pleasant crackle of wood charcoal a-blaze!  My eyes?  Not so much… 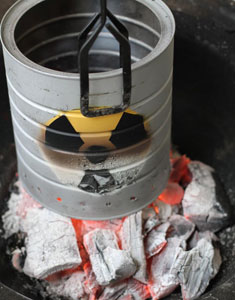 I got a bad surprise when I removed the can with my charcoal tongs.  Sadly, my poor little heat-resistant color scheme died in the process.  It turns out that heat-resistant motor and barbecue paints work best on their intended applications, as opposed to something as thin-walled as a heated coffee can.  Next time, I’ll make a chimney starter from sterner stuff, then try painting it.  Hey, who would’ve thought that barbecue grills and car motors are made from thicker metal than a food tin?  As if internal combustion and cooking meat required more heat dissipation than holding a pound or two of ground joe…