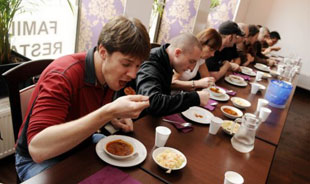 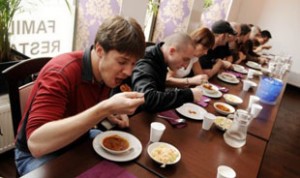 Photo by TSPL, courtesy of Metro.

Sorry, I couldn’t resist the alliteration. But then, some topics require abundant doses of the absurd, especially where superhot eating contests are concerned. Case in point: the dumbasses who thought it would be a nifty idea to chow down on bowls of ‘Kismot Killer’ curry featuring superhot chile peppers. Edinburgh, Scotland-based Kismot Indian and Bangladeshi restaurant was ground zero for the mother of all curry-eating contests.

Granted, it was for a good cause. Participants in the 2011 charity event, which raised £1,500 for the Children’s Hospice Association of Scotland, had to eat spoonfuls of increasing strength ‘Kismot Killer’, with those who took a drink of milk before the end being disqualified.

But the contestants, two of whom (including contest winner Beverly Jones) had to be hospitalized with intense cramping, vomiting, and other equally unpleasant symptoms, couldn’t say they weren’t warned. The following text is part of the disclaimer from the host restaurant’s website: 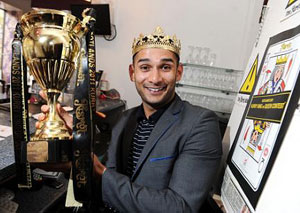 Restaurant manager Abdul Ali said he was surprised by the intense reactions of the contestants. Photo by EN News, courtesy of Metro.

“Kismot Restaurant will take no responsibilities for the bodily functions after you eat the curry. If you die whilst eating or as a direct result of eating the curry, members of the table will share the cost of your ‘Kismot Killer’.

If you become ill due to the ‘Kismot Killer’ or if you find that you are experiencing any problems with your lover(s) then under no circumstances are you entitled to blame Kismot Restaurant or any members of its staff.”

That’s right, folks. In the event that you are rendered IMPOTENT by the effects of Kismot’s special concoction, you have only yourself to blame. There doesn’t appear to be any rematch scheduled at this time, but we’ll keep you posted! I’m holding out for the superhot haggis-eating contest, myself.