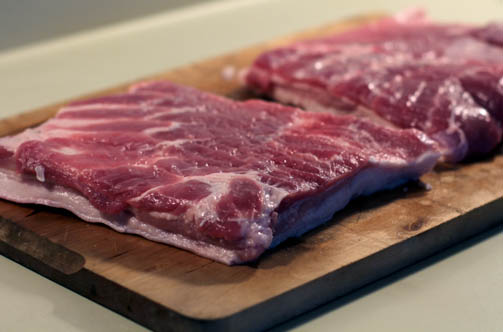 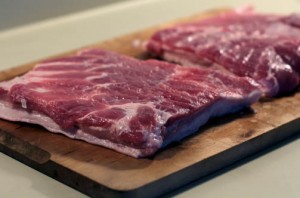 Oh, happy day! Last week, the U.S. Department of Agriculture (USDA) changed its bureaucratic mind on the recommended safe temperature for cooking pork. Swine joins the ranks of beef with a new safe temp of 145 degrees F. for all whole cuts of meat. Or, as we commonly know them, steaks, roasts, and chops. That’s a temperature as measured by sticking a food thermometer into the thickest part of the meat, then letting the meat rest for three minutes before carving or consuming.

However, that’s only for whole cuts. This change does not apply to ground meats, including ground beef, veal, lamb, and pork, which should be cooked to 160 degrees F. and do not require a rest time. According to the USDA, cooking raw pork, steaks, roasts, and chops to 145 degrees F. with the addition of a three-minute rest time will result in a product that is both microbiologically safe and at its best quality.

Just so you know, “rest time” is the amount of time the product remains at the final temperature, after it has been removed from a grill, oven, or other heat source. During the three minutes after meat is removed from the fire, its temperature remains constant or continues to rise, which destroys pathogens. USDA’s Food Safety and Inspection Service (FSIS) has determined that it is just as safe to cook cuts of pork to 145 degrees F. with a three-minute rest time as it is to cook them to 160 degrees F. (the previously recommended temperature) with no rest time. The new cooking suggestions reflect the same standards that the agency uses for cooked meat products produced in federally-inspected meat establishments, which rely on the rest time of three minutes to achieve safe pathogen reduction.

Historically, consumers have viewed the color pink in pork to be a sign of undercooked meat. If raw pork is cooked to 145 degrees F. and allowed to rest for three minutes, it may still be pink but is safe to eat. The pink color can be due to the cooking method, added ingredients, or other factors. As always, cured pork (e.g., cured ham and cured pork chops) will remain pink after cooking. Appearance in meat is not a reliable indicator of safety or risk. Only by using a food thermometer can consumers determine if meat has reached a sufficient temperature to destroy pathogens of public health concern. Any cooked, uncured red meats – including pork – can be pink, even when the meat has reached a safe internal temperature. (editor’s note: pork sushi, while it sounds cool, still isn’t a good idea)