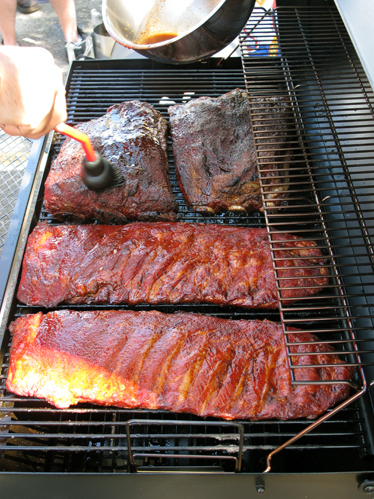 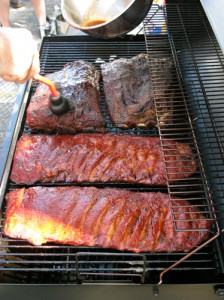 Last weekend, a good buddy of mine took it upon himself to open the lid on my grill and check the food.

Right after I’d just checked it myself.

You do not second guess someone when they’re grilling unless the grill is consumed in fire. My friend’s lucky he’s stringy or he’d have been the next course. Not because I’m into long pig– I’m not a cannibal. I am, however, a firm believer in object lessons. Especially to any would-be violators of my grill second guessing my work. I have plenty of friends so I can afford to cook one here and there.

That said, I’m guessing cleaning and dressing a dead body is a bit more of a pain in the ass than trimming ribs from the grocery store. So to avoid any confusion going forward, I’ve come up with this version of a guide to barbecue and grilling etiquette.

1. Can I bring my dog?
Only if it fits on my grill. Other than that, keep your self-cleaning food snatcher away from someone else’s grill party unless you ask in advance.

2. What should I wear?
I own (and wear) a t-shirt with a zombie girl on it captioned, “Dead Chicks are Easy.” Wear whatever you want so long as it doesn’t traumatize any kids. Unless they’re bad little rotters. In that case, twenty or thirty trips to therapy after seeing you in chaps and a goalie mask might be just what they need. And their parents may thank you for that. Once you’ve finished serving your sentence, of course.

3. Do I have to invite my neighbors?
Only the ones you like or plan on borrowing tools from. Optionally, you can invite the ones you don’t like who bring beer and leave early.

4. How wrong is it for me to tend the grill if I think I’m a better griller than the host?
Hijacking the grill is about as polite as eying a gunfighter’s woman and twice as dangerous. It’s also a no-win scenario. If you are a better grillmaster and you take over, you’re not letting the host log the grill time they need to improve AND insulting them. If they’re better with a grill than you are, congratulations–you’ve probably just screwed up whatever they were cooking and outed yourself as an idiot in one stroke. If you really want to show how cool you are in front of a Weber, have your own party.

5. Can I bring meat, booze, and sides?
My thought on that is, “Yes, hell yes, and yes.” Asking the host which of those they need and if they’ll have room for extra dead animal is a great idea, though. And if you’re going to bring meat, bring enough for more than just you. Unless you’re bringing aged road kill. You can keep that.

6. How rude is it to bring my own sauce?
Gee, why don’t you just start flipping my burgers while holding your dog, you self-centered prig.

7. Am I required to have vegetarian offerings?
No, but sacrificing a two-legged herbivore to the grill gods is never a bad idea. Neither are grilled corn-on-the-cob, veggie skewers, baked beans, or baked potatoes. If you’re making sides anyway, they might as well be staple items like these that vegetarians can enjoy too. An exception to this policy is what I call the Vegepreacher–a vegetarian who won’t shut up about how meat is murder. If the only planteater I’m expecting is a Vegepreacher, everything gets dipped in pork fat. Even the ice cream.*

*that might be a slight exaggeration on my part. Don’t think I haven’t been tempted though.