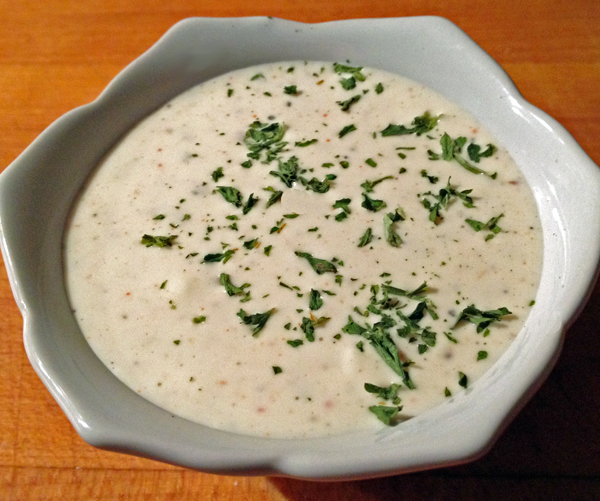 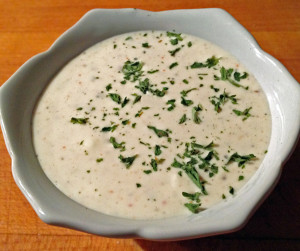 Most folks think of BBQ sauce as a thick, sticky tomato-based sauce slathered on pork ribs, brisket and chicken and thinner vinegar-based sauces are often used for pulled pork or mutton, especially in the Carolinas. (Think Western Carolina Dip or Piedmont Dip.) Mustard-based sauces using mustard and vinegar instead of tomatoes and molasses are popular in South Carolina.

White BBQ sauce is unique… there are no tomatoes in the sauce. It’s a mayonnaise-based sauce, made tangy with the addition of vinegar, horseradish and mustard. Offered in most every BBQ restaurant in North Alabama, the sauce is eaten with everything from French fries to chicken and ribs. The unique, tangy flavor is the perfect complement to just about everything. Without the Internet, it would be pretty much unheard of outside of North Alabama.

Although probably existing in numerous other restaurants in North Alabama, “Big Bob” Gibson capitalized on his restaurant’s white sauce and is credited by many with concocting Alabama white sauce in 1925. Big Bob Gibson’s is still in existence – 70 years later – in Decatur, Alabama, and its pit master, Chris Lilly, is an award-winning competition BBQ cook… his team has won almost every major BBQ competition including Memphis in May, Jack Daniel’s and the American Royal.

While some recipes call for the sauce to be simmered for a few minutes, usually the sauce is just mixed in a bowl. Like many barbecue sauces it should be applied at the very end of grilling or smoking. The sauce will break and separate if heated too long.