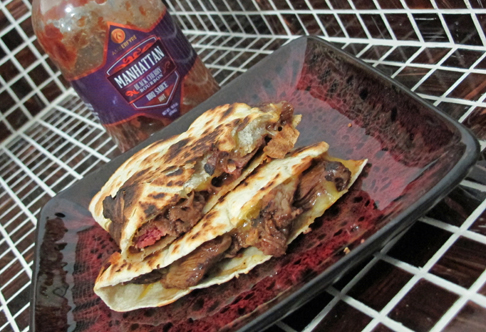 Amber Button and CaJohn Hard brainstormed this sauce during talk of the big city steakhouses popularized during the 1950s and `60s. It’s a blend of Kentucky bourbon, marinated cherries, a touch of vanilla, chile peppers, and what you’d expect to find in many barbecue sauces. The stuff definitely goes great with barbecue beef and steak; if you like yours on the sweet heat side, it’s mouth sex. I didn’t want to try it out on anything nearly so normal as brisket, though. Instead, I went with a barbecue steak quesadilla. What surprised me was just how well the sauce tenderized the flap meat I used for the recipe. The stuff was almost fork tender before grilling!

If you really want to do something awesome with this sauce, track down some beef bacon, candy it in the sauce, and use it on a steak burger with sauteed mushrooms. I didn’t get a chance to do that because the beef bacon heard I was coming and bailed from all of my local stores. Once the bacon lets its guard down, I’ll post the recipe for that also.