Excerpted from Dr. BBQ’s Halloween Barbecue Feast at Fiery Foods and Barbecue Central, this pumpkin cheesecake serves as a great alternative to pumpkin pie, bread, or the nasty wax mouth-hell we call “candy corn.” Just don’t let the trick-or-treaters see it or it’ll vanish as sure as if they were raccoons on a night raid. Which, when you think about it, they kind of are, aren’t they? 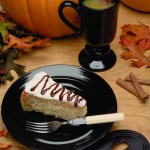