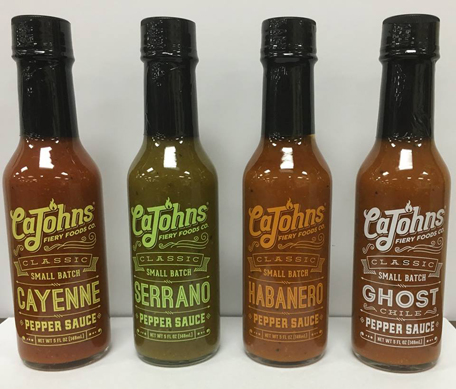 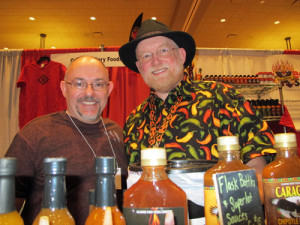 The author and CaJohn at the 2015 Fiery Foods Show.

The Classic Small Batch line is a return to the pre-superhot days, to recapture what attracted a lot of us to spicy in the first place. Many a chilehead cut his or her tastebuds on the vinegar-and-salt Louisiana-style offerings of Tabasco and the other big boys in the hot sauce world. Classic Small Batch is what happens when a dedicated legend of the chilehead world creates his/her own tabletop hot sauce. Think of Classic Small Batch as a gateway sauce for chiles. The pepper content is higher than you’d find in the mass-produced cousins (42% versus 15% or less). Intrigued by this development, I thought I’d pick CaJohn Hard’s brain about the new lineup.

Describe the batch sauce. What was your goal with it?
“We’re going to shake things up. Wev’e gotten to the point where much like with craft beers, there are craft hot sauces. This is us making an inexpensive sauce in a nice package. I think it’ll do wonders for us sales wise. It puts the ghost chile in the price range of that the big name sauces would be instead of being so much higher.” 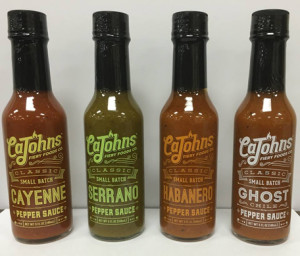 Why’d you do it?
“These are kind of Louisiana style sauces but with 40-42% pepper instead. We felt there was a market out there for that. The cost of chiles has come down tremendously. They’re a commodity now. A lot of small production farmers are growing them, even here in Ohio. The days of the $30/lb unusual chile are over. People really seemed to like this recipe and we’ve done it with cayenne, maruga, and habanero chiles. We’re not going to the grocery end but we want chileheads to enjoy a good, honest hot sauce and in a package that would normally command a higher price. We’ve always been one to be unusual and hotter.”

Why the serranos? Why not jalapenos?
“We picked the serrano over the jalapeno because it has a stable heat. I was at a show with Rick Bayliss who recommended serranos and now I’m quite a serrano fan. It has the heat of a jalapeno but is more consistent. We kept it green. We’re doing it so it’s not fermented at all, not salted and surgared heavily. Those things are there, but not overly so. We also use lemon extract. Jim Campbell taught me to do that in oder to make the peppers TASTE hotter without actually ramping up the heat.”

Will there be similar batches in the future?
“We will be expanding this line a bit. We have a chile lime taco sauce coming and a 10 poz bottle of the cayenne for restaurants. The price point makes us competitive with Tabasco, Cholula, etc. We’re trying to get local restaurants to buy. To use a nationally known maker that’s local here.

Talk to us about the eye-catching label.
“I really like the screened-on label and it’s not any more expensive to get one made. It’s a little longer from start to finish to get the bottles. Unfortunately we have to have the bottles first before we fill them but it’s a real nice look. A retro throw back to the 1950s. We plan on coming out with some other hotter peppers.
We’re starting with the Ghost Pepper due to its prominence in the public eye. The Indian government did a wonderful job marketing the Ghost. Plus we can get them at a very reasonable price. We grind the chiles and we make a base (vinegar and ground chiles) that’s cooked and packaged. It has a shelf stability for five years. I’m a huge fan of getting rid of these expiration dates anyway. I’m gonna guess that a bottle of hot sauce is gonna be good longer than I am, going forward. We’re trying to make a fresh tasting pepper sauce that isn’t a sodium bomb also.”

How do people buy this stuff?
“It’s not gonna be online right now. For the next month, it’ll only be available from us by phone until we catch up on production. It will be online within the next week, I’m hoping. A website is only as good as its webmaster. One interesting thing about our site, we give our webmasters a sales percentage as a motivator.”

What would you use Classic Small Batch with?
“It’s a table sauce meant to be used as a cooking sauce or condiment. It’s thicker than a normal Louisiana style, which by convention, has salt, vinegar, and peppers. You can pick it up and put it on anything you eat. It’s still a high quality fresh tasting pepper sauce.
Here’s another interesting thing: This year we’ve grown these three jalapeno varieties from New Mexico: lemon, orange, and pumpkin spice. A normal jalapeno is about 5k SHU; these are in the 10s of thousands. Those are things are coming in whiskey bottle sized packages. We’re also using the Trick or Treat heatless habanero.”