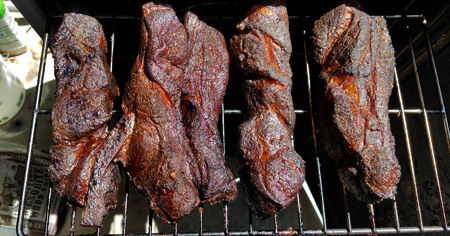 As I’ve traveled the country making notes, testing recipes, and learning barbecue tips from chefs I’ve settled on the best method of barbecue cooking savvy to recommend to all barbecue cooks. I believe that cooking-to-temperature rather than old-fashioned, cooking-to-time is a much better way of grilling, smoking and barbecuing. 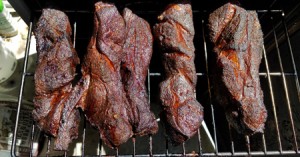 These country pork ribs were done when the thermometer said so. And it was right.

First, if you don’t have a meat thermometer, get a good one. After all, your guests and family rely on you to produce safe food, so don’t scrimp on a thermometer. A good instant-read digital thermometer is worth every penny. They are invaluable and take the guesswork out of every barbecue outing. The stick a probe in the meat and watch the needle register temperatures are unreliable, unless you re-calibrate them before every use. 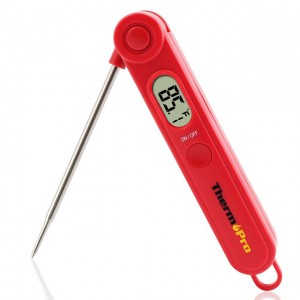 If someone tells you to cook a steak, for “4 to 5 minutes” there are so many things that can go wrong that we’ve listed a few of them here: 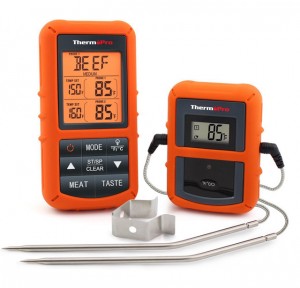 …while the ThermoPro TP20 Wireless version is around $59.99.

Cooking for 4 to 5 minutes entirely depends on each steak being the same thickness, maintaining the same temperature all the time it’s cooking, allowing for no temperature variables inside the barbecue, or in the fuel you are using, it relies on a stable outside temperature and humidity, depends on having no heat loss from the barbecue itself, all the while letting no one lift the lid to check on the food, thereby losing heat and throwing off your timing.
All the above contribute to inaccuracies, raw, or over-cooked food, and assorted culinary disasters when using solely “how long do I cook it?” method. Cooking a pork roast for 4 hrs. can go totally wrong if the outside temp. drops, the humidity changes dramatically (like you know, rain), you’ve miscalculated the amount of charcoal you fired up, your gas pressure changes, the sun heats up the metal bbq grill, or a stiff wind chills it, some boob opens up the grill six times to “see what’s cooking?” or about 50 other variables that don’t affect what you are cooking if you merely follow the temperature guidelines for whatever you are grilling or smoking. Pretty simple, right?
We prefer to give you a much more accurate means of checking the doneness of the food you are cooking, and educate you that time is only a guideline, that really temperature rules in barbecue.
In other words we suggest you cook your beef steak to medium rare (130˚F to 135˚F), medium (135˚F to 145˚F) medium-well (145˚F to 155˚F), or well done at 155˚F and up..
We suggest pork should be cooked to: medium-pink (135˚F to 145˚F˚), medium-well (145˚F to 155˚F˚, and don’t recommend temps higher than that. “Medium-pink” instead of rare? Because there’s something about the word “rare” while discussing pork scares people silly, and today pork is perfectly safe served with the center of the meat slightly pink, and much better tasting and much more moist.
We’ll inform you that lamb should be prepared to: medium rare (130˚F to 135˚F), medium (135˚F to 145˚F) medium-well (145˚F to 155˚F), or well done at 155˚F and up.
And we’ll let you know that poultry (chicken, turkey, duck, game hen, etc.) should be cooked until a meat thermometer inserted in the breast reads 160˚F, and in the thigh reads 170˚F to 180˚F.
(Note: Rick has published 16 barbecue, smoking and grilling cookbooks, hosted Barbecue America on public TV for seven years, hosted Ready, Aim…Grill on the Outdoor Channel for two years, and is recognized as one of America’s leading barbecue and grilling experts.)