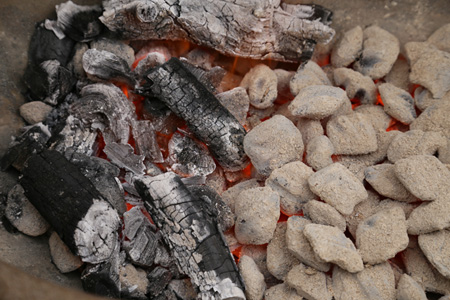 Charcoal has been manufactured and used by man to cook with since pre-historic times. Recently, the 5,300 year-old body of a man was recovered in the Tyrolean Alps, and scientists found that he was carrying a small box containing bits of charred wood wrapped in maple leaves. He had no fire-starting tools such as flint with him, so it looks like he may have carried smoldering charcoal instead to light fires. 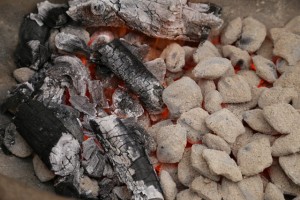 Charcoal is made by burning wood in the absence of oxygen and is preferred by many barbecue cooks because of its relative purity.
Here is a great explanation of how lump charcoal is made that I borrowed from a Washington Post article by Robert Wolke: “If wood is heated in the absence of oxygen (a process called destructive distillation), it can’t burn. Instead, it decomposes. First, its water is driven off. Then its carbohydrates (mainly cellulose and lignin) begin to break down into methyl alcohol (therefore known as wood alcohol), acetic acid, acetone, formaldehyde and many other smokes and gases. Eventually, nothing is left but virtually pure carbon. That’s lump charcoal.”
Lump charcoal has a lot of redeeming qualities; it lights faster, burns hotter, and leaves very little ash compared to the somewhat more popular charcoal briquettes. Lump charcoal is also more responsive to oxygen, making it easier to control the fire’s temperature if your barbecue grill has adjustable air vents. It is, however, usually more expensive than briquettes bags of the lump variety contain greatly unequal size, with some chunks the size of tiny pebbles, and some the size of your fist.
Charcoal briquettes were invented by a professor at the University of Oregon and then quickly taken over by Henry Ford who built a plant to make them using waste scraps of lumber and sawdust from his Model T plant (did you know that much of the frame of these early cars was wood?).
Briquettes today are cheap, reliably standard and uniform in size, can be found almost everywhere, but are often made of questionable (environmental-wise) ingredients. In 2000 Kingsford, the largest manufacturer of briquettes in the US, release the ingredients of their briquettes: wood charcoal, mineral char (brown coal), mineral carbon (graphite), limestone (to produce the white ash), starch (as a binder), borax (to release them from their forming molds), sawdust (to ease lighting) and sodium nitrate, which releases oxygen that help them light quickly and burn consistently.
We’ve all noticed the chemical smell when you first light most brands of briquettes. And some have charcoal lighter-type fluid added to really make them light quickly. Charcoal lighter fluid is one of the most harmful (again environmental-wise) chemicals on the planet and should never be used by backyard barbecuers.
It seems a bit odd that we are cautioned to let the charcoal burn for a while to let the chemical burn off before we cook over them. How long is long enough? There will always be some remnants of these chemicals being sent up and around the food we’re cooking, so why bother. I wonder at the delicious flavors imbued into my steak when it’s cooked over tar-containing coal, starch, borax, and wood sawdust. Yum.
There are some moderately good advantages to briquettes however. They provide a more stable ignition and burn rate, are easier to control, maintain a fairly steady temperature for a long period of time, and usually have less hot spots than lump charcoal.
One of the primary ingredients, known as char, is basically the traditional charcoal. It is responsible for the briquette’s ability to light easily and to produce the desired wood-smoke flavor. The most desirable raw material for this component are hardwoods like oak, hard maple, beech, birch, and hickory.
Some manufacturers also use softwoods like pine, or other organic materials like dried fruit pits and various nut shells.
Remember the other primary ingredient: coal. Various types of coal may be used, ranging from anthracite to sub-bituminous lignite. But it’s still tar and soot producing coal.
Minor ingredients include a binding agent (typically vegetable or grain starches), an accelerant (such as the nitrates Kingsford lists), and an ash-whitening agent (borax or lime) which is added so that the backyard barbecuer will know when the briquettes are ready to cook on.
One big dig, the briquettes produce so much ash that using them in my ceramic cooker causes the air vents to easily get blocked thereby reducing the efficiency of the cooker. So I have to regularly scrape out the ash, even during the time I’m cooking something for a long time.
There are some new charcoal bricks and briquettes that are made purely from organic compounds that don’t mess up the ozone layer, and emit less toxic chemicals than the treated briquettes, and produce less ash than their predecessors and I highly suggest you look for and use them if you like to use briquettes.
For a superb website that reviews dozens of varieties of charcoal go to this site. There you can read about more than 75 varieties of lump charcoal and pick one that has the characteristics you like. Each review discusses the price, weight, type of wood, smell, country of origin, lighting instructions, amount of ash production, burn time, unusual materials, amount of charcoal dust in each bag, and even includes pictures of the contents of each brand. A wonderful tool for the barbecuer who only likes to use lump charcoal.
Please, again, do not use liquid charcoal lighter to ignite your briquettes or lump charcoal, instead use paraffin starter blocks, electric starters, propane starters, gas torches, or metal chimney starters and newspaper. The environment, the food you cook, and your dinner guests will thank you.