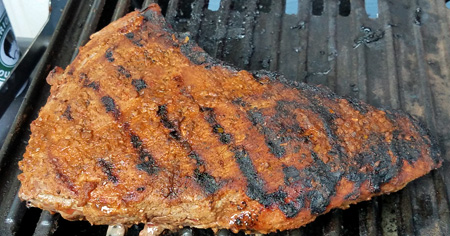 I don’t really care for steak sauce but Stubbs Texas Steakhouse Marinade here is going to be the latest exception to that rule. Most likely because of the Ancho Chile & Garlic part on the label. That’s what initially drew me to try this stuff; it took me way too long to notice the word “steakhouse” on it. Which is a very good thing. 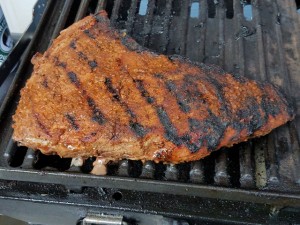 By which I mean, I’d already marinated a tri-tip roast in it, tasted the marinade on its own, got giddy at the aroma of ancho and garlic wafting off my grill, sliced the meat, served it, and ate it before I even knew its intended purpose as a steak sauce. It was that impressive to me. 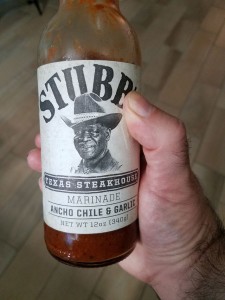 Unlike the glorified Worcestershire sauce that passes for most bottle steak sauce, this one has more body to it in my opinion. The heat and sweet really come through over the salty without overpowering the other flavors. You get an initial blend of spices and sweet when you taste it, followed by a mild sting that’s pretty pleasant, in my opinion. By using a rather chunkified version of minced garlic, you get a little bomb of the stuff in your mouth whenever it hits one of the little landmines.
I used it with a tri-tip roast but naturally any beef cut or other red meat would have worked just as well. If I were back home in Alaska on a caribou hunt, this marinade would definitely have a seat at the fire. Its only real drawback is that only one store in my area carries it. For more info, check it out here.