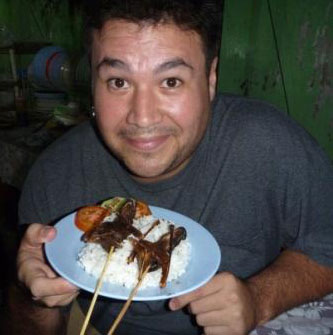 Words and Photos by Robert Staudhammer 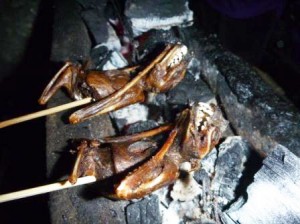 Slip another bat on the barbie...and smile when you do it!

As I wandered the bustling streets Yogyakarta, Indonesia, I caught word of a rather interesting local delicacy. In the open markets crowding the edges of the famed Malioboro street, I started my search. My imagination pushed forward my tired feet and eventually, in a confluence of pantomime, optimistic suggestion, and a dose of good luck, I found my prize: bat.

Initially I held out hope for a fruit bat—something with some real meat—but to my dismay, the bats offered for consumption were more winged mouse than flying fox. A plastic bowl full of fried flyers rested on the simple table of a smiling, elderly woman. When I showed her my camera to ask permission for a few photos, the smile leapt from her face and she reluctantly agreed with a huff and a wave of her hand. I took my pictures, asked how much, and pulled from my pocket enough money for two bats. Immediately the abandoned smile found its way home. 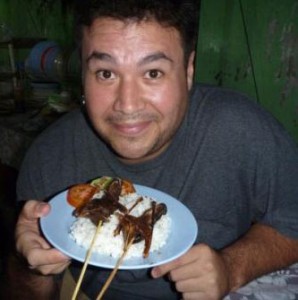 The author with his meal.

Considering the lack of line at the woman’s table, I’m guessing that this particular snack draws people looking to take a picture rather than a bite. I sorted through the pile, not knowing exactly the best way of selecting the tastiest of the bunch. For avocados and melons I have a method; for tiny mammals I’m at a bit of a loss. I picked the biggest two, and she happily skewered my choices and held out to me what now resembled bat-flavored lollipops.

I have a few rules about street food that govern—not what I eat (obviously)—but how I eat it. Tepid meat that’s been sitting uncovered on a table for who knows how long is a one-way ticket to days in the bathroom praying that you don’t supernova when both ends fire at the same time. Whether or not this information is an intricately calculated hypothesis or a declaration of unfortunate personal experience I will not say. Either way, I politely ask the kind woman to toss my tiny saté on the grill for a few minutes on each side. 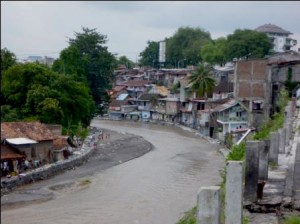 Yogyakarta (pronounced “Jogjakarta”), or Yogya for short, is the heart of central Java’s unique personality.

Momentarily, my vermin are ready and plated decoratively on a bed of rice with tomato and cucumber garnish. Unfortunately, since the skin of the batwings completely cooks away in the oil, I am left with a very small meal. The meat is more like jerky at this point. My teeth pinch small strings of meat from the tiny frame. It tastes exactly like elk jerky—a little gamey and very rich—hmmm, it’s actually not that bad. Essentially, the weirdest part about eating bat was seeing the eerie grin on his little furry face while my mouth searched for morsels of meat. 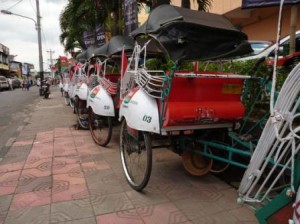 The old streets of the city are often choked with traffic, so touring the city is most easily done on foot or by bike taxi.

As I ate, some local passersby stopped to watch the show. Traditional delicacies often are born from necessity and cultivated into acquired cravings. However, I get the feeling that this particular delicacy’s appeal is in the fact that it would never be found on a menu back home. 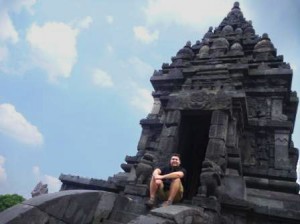 Robert Staudhammer is a native New Mexican on a mission to see, hear, and taste his way around the planet. His goal is to experience life and open his senses to anything and everything new. Read his blog here.