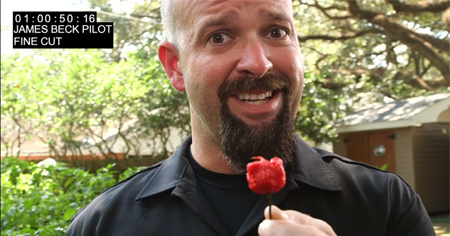 TV and movie executives could teach politicians lessons in spinelessness when it comes to ambitious new projects. They’re the kung fu masters of playing it safe; just look at all the old shows and movies they keep recycling instead of creating new shows and movies from original stories. Seriously, how many times are you going to remake A Star is Born, Hollywood? Take that played out story out to the desert, put a bullet in its head, and bury it already. Instead, think how cool would it be to have a TV series dedicated to the spicy world of chile peppers. James Beck, the Hot Sauce Boss himself, hosted a pilot for just that. Here’s what he had to say about the pitch process in his Facebook post earlier today: 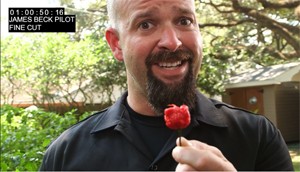 “About 18 months ago I hosted the pilot for a spicy food show at the request of a popular cable network. Let’s call this network ‘Gravel Channel’. We shot exactly what they wanted. Roughly a year later they said no to the concept because they decided to change their programming to primarily shows about ghosts and spirits.
At the beginning of this year a popular streaming network also considered the possibility of airing a show about spice. Let’s call this platform ‘Notprix’. After months of research, development and careful consideration they rejected the concept because they weren’t interested in doing more food programming.
Apparently broadcast executives feel there is no demand for spicy food programs, so I want to see what you think. Watch the 21 minute video below and express your opinion in the form of action. If you like/love the video then like, love and share this post. If not, dislike or do nothing. Let’s see if these decision makers know you as well as they think they do.
This is NOT the broadcast ready version of the show. This is what’s known as a fine cut. The narration is not me and the graphics have watermarks, but the segments are legit.”
You’ll find the pilot here and the password is TravelChannelSux. Let’s get the word out!