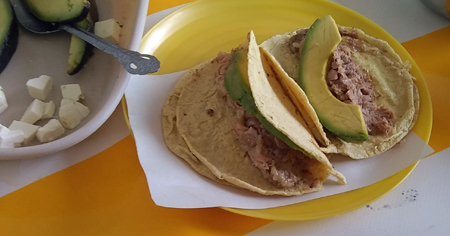 By José C. Marmolejo
Mostly unchallenged in the U.S., to barbecue means “to cook outside”, unless you face a purist from the Barbecue Belt. He will be anxious to start a discussion about what barbecue really is but if you tell him about cooking meat “low and slow” over indirect flame you will get yourself a new friend. 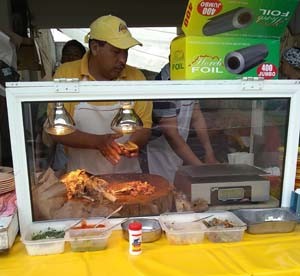 Barbecue, a pre-Hispanic meat cooking technique, can be traced back on the American continent all the way to the Mayans as “Pib,” meaning “hole.” They cooked wild boar and tapir in a pit. Today in the Yucatán Península, pork is the most cooked meat in a pit known as Cochinita Pibil—the most representative dish of the region—which means “female suckling pig cooked in a pit.” Barbecue was also popular in the Caribbean islands during the conquista and was carried north to the American continent by the Spaniards. 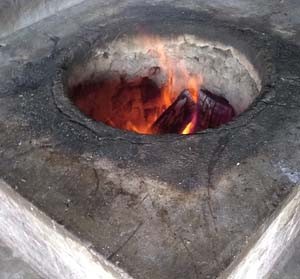 Barbacoa, as it is known today in Mexico, has as many variants as there are regions and cooks, but avoid telling people from the Yucatan Peninsula that Cochinita Pibil is a barbacoa; it will not be accepted and it may disturb a friendship. Starting with the meat, (which could be beef in Northern Mexico, mutton in Central Mexico, and goat, armadillo or iguana, in the south) plus the large variety of herbs, spices and chiles available in the country—all wrapped in agave or banana leaves—the results are overwhelmingly diverse with distinct and wonderful flavors owned by every region. 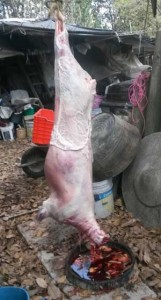 One of the hardest things to accomplish in Mexican gastronomy is to extract a “cooking secret” from a traditional cook. Chefs and cooking professionals are always glad to share knowledge, the product of painful learning or long experience, but for people who inherited a recipe, method, or technique, that’s another story. Jealousy prevails and society is denied many ancient food treasures. 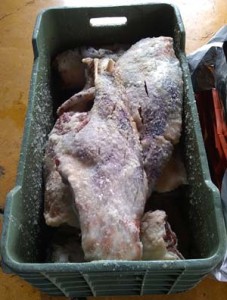 As Mexicans do not know how to say no, your request to see, document, photograph or film a gastronomic execution will end up in a “mañana” or “la semana que viene” response which means most likely it will never happen. I however, have been lucky enough—so I thought—to be allowed by neighbors to witness the preparation of barbacoa, a local family tradition. This didn’t mean I would get all the secrets, because while they ask you to come at 10 in the morning to watch the cooking project begin, when you arrive they’ve already did all of the prepping! The next step—placing the meat in the pit—is at dusk, and you only get to witness how the pit is being lit. The rest of the day is spent watching the fire being maintained, and you are told there is nothing else interesting to see. The following day at dawn, the ritual calls for getting the meat out of the pit and make tacos. Done! Eat! 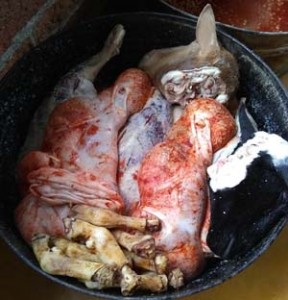 To cover my…self, I arranged a visit to a second local barbacoa purveyor to verify the method and hopefully increase or complement my knowledge. That’s how I got to see another procedure which was not exactly the same as the first one, and left me with more questions than answers. 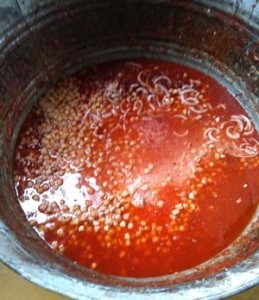 Steaming tub with marinade that will turn into broth

Since the pit cooking technique is rather easy to understand and execute, my main interest was to decode the marinating or seasoning process. One family marinated the meat while the other seasoned it with a rub of herbs—avocado leaves included—,spices and chiles. The explanation I got from marinating was that the leftover of the marinade is added to the water to be used for steaming, which results in a flavorful broth. The version where the meat was seasoned with a rub, the steam also produces a broth but not as spicy or complex. I was told that seasoning a piece of meat to be cooked slowly has the purpose of preventing the meat from drying. The time and temperature of cooking results in the formation of an impervious crust which keeps the juices inside and after cooking the edible resulting membrane will serve also as a complement to the meat flavor. It is here basically where the difference between those two barbacoas resides. 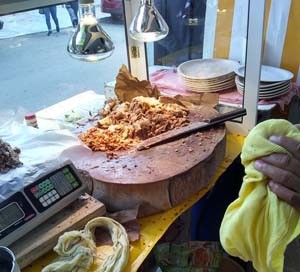 Last step: the chopping board

Now that I finished writing this last paragraph—and salivating while reminiscing about the smell and flavor of barbacoa—one question comes to my mind: can we do barbacoa at home without having to dig a hole in the yard? The answer is yes. Obviously it will not be the same but then again none of the barbacoas are the same, right? Well, it is possible to produce a wonderful barbacoa at home and it will be your barbacoa, like nobody else’s. And you don’t want to be like anybody else anyway… 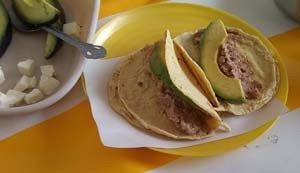 The finished product, ready to meet its fate.

Let’s take a close look at the technique. It is basically steaming meat inside of an oven. That’s how it works. A steamer that is heated all around instead of over a direct flame. The cooking is uniform, at low temperature, and for many hours, overnight to be precise. The meat absorbs the heat and releases its juices dripping back into the liquid below with no place to go but back up in steam softening the tissues and keeping them moist. As the hours wear, it is the heat that finds a way to dissipate at a slow speed leaving meat, moisture and juices converted into a wonderful concoction. This could be achieved setting up a steamer inside a stove oven, but are you familiar with a slow cooker? Are you thinking the same thing I’m thinking? If you do, you and I know where the slow cooker invention came from. Well, that being the case, let’s use some banana leaves, wrap a seasoned piece of meat and slow cook it overnight. That simple! Concerned about quantities? Check the recipe below, but be adventurous, alter the herbs, spices and chiles ad libitum… remember: it’s your barbacoa, you won’t regret it!

Homemade Barbacoa
This is a fast track version of a traditional dish that is widely found in Mexico.

Instructions
In a mortar or blender grind the chiles, garlic, herbs, spices, and salt with the oil into a paste. Rub the mixture generously over the meat. Toast the banana leaves lightly until they become pliable without breaking. Wrap the meat with the banana leaves and tie it with the cord. Place the wrapped meat in a slow cooker or a steamer and cook at the lowest temperature for 8 to 10 hours. Let it cool and open carefully. Enjoy!

Salsa Borracha
The quintessential salsa for barbacoa, made with pulque, (fermented agave juice) is not easily found anymore. Here is a version that can be made with beer.

On a griddle, toast the pasillas until they are aromatic turning them often along with the onion and garlic. Allow the chiles to cool and remove the stems and seeds. In a food processor or blender, purée the pasillas with the onion, garlic, oil, salt, and beer. Transfer the mixture to a bowl,. Check and adjust for salt.