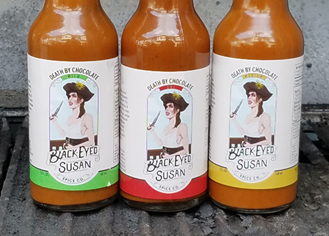 Black Eyed Susan Spice Co’s Death by Chocolate hot sauce line packs a solid punch. It’s centered around the chocolate habanero, with apple, peach, garlic, and cocoa all playing a part in a flavor profile that’s sweet and sour with a subtle chocolate tone to it. What is not is a weak little sauce line for snowflake people with manbuns who can’t stop saying, “It’s about the journey, not the destination” while sipping a green maca crappaccino extra whip, whose phones are much smarter than they are. 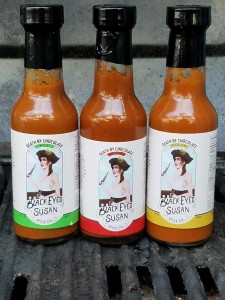 That’s oldguyspeak for “Death by Chocolate has a good flavor but its heat isn’t for the timid.” If you’re entertaining a group of people whose general idea of spicy falls on the milder side, Death by Chocolate may be a bit of a shock for them; the mild version of the sauce has a medium-sized kick because the chocolate habanero pepper, while not a Ghost or Reaper, still isn’t anybody’s bitch. What these sauces are is a blend of sweet and sour with a touch of cocoa followed by a good dose of heat. After I tasted it, I thought I’d try it out on something the local fast fooderies around here have been pimping for a while in a watered-down form: the hot chicken sandwich. 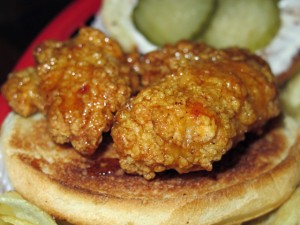 I made up a batch of fried chicken and coated it with a blend of honey and Death by Chocolate for stickiness, then tried each one as a sandwich with mayo and pickles on it. The sauce goes quite well with honey and each successively hotter sandwich had a hotter kick, as you’d expect. I was pretty happy with the results but I think I’d have been even more pleased had I tossed fried or grilled wings with the honey/sauce blend. But that’s on me. The recipe is below. You can pick up a bottle or two or three from Black Eyed Susan right here. 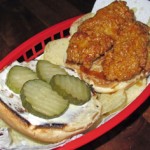