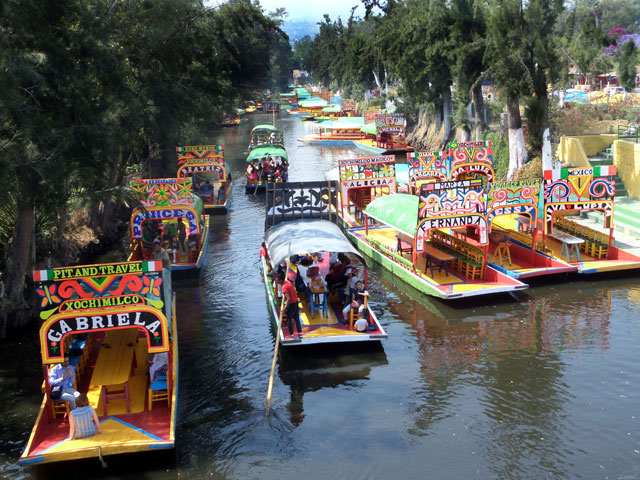 Story and Images by José C. Marmolejo
Tenochtitlan was, in 1520—right before the conquest—the city from where the Aztecs ruled their empire. It had more than 500,000 inhabitants, making it among the most populated cities in the world at the time. It was built on a lake inside a valley which was fed by rainfall and water runoff from the mountains in the west of where Mexico City is today. The Aztecs—living in the lake and around it—built a sophisticated system of dams and locks to control flooding during the rainy season and to secure a water supply in the dry season for domestic and food production purposes. And as it happens to this day, the Aztects directed the water surplus to the east of the city, and from there to lower lands outside the valley. 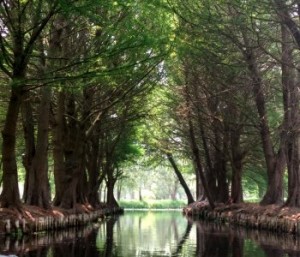 A channel between chinampas.

What was naturally a big lake was turned over time into smaller lakes and a network of channels that served to conduct water where it was needed and as navigation routes for water traffic. As the local population grew, more and more land was created by carrying soil from around the lake and extending thus living areas. For food production, the inhabitants developed a method wherein trees were planted or poles placed on shallow waters, then a small artificial island was created using a network of sticks that would float and the people began to cover it with soil, vegetable debris, and humane refuse—what we call composting and dry latrines today. These little islands would float but remained anchored in place by the trees or poles, making room for homes and gardens. Little irrigation or none was needed since half of the year it rained and capillarity worked through during the dry season. This is how Chinampas were born and still work today! 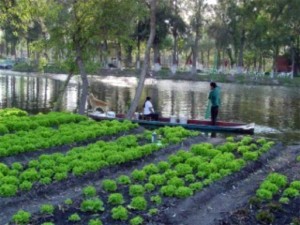 As discussed in our previous post Milpa Mexicana Part 1, UNESCO recognized traditional Mexican cuisine as a “comprehensive cultural model comprising farming, ritual practices, age-old skills, culinary techniques and ancestral community customs and manners” and Mexican cuisine was designated as an “Intangible Cultural Heritage of Humanity”. Furthermore, UNESCO claims that “The basis of the system is founded on corn, beans and chili; unique farming methods such as milpas (rotating swidden fields of corn and other crops) and chinampas (man-made farming islets in lake areas).”

In 2018, the Chinampa agricultural system was recognized as an Agricultural Heritage System of Global Importance by the FAO as one of the landscape environments Important to Global Agricultural Heritage Systems. The chinampas today are located in the Xochimilco, Tláhuac and Milpa Alta municipalities within Mexico City, and comprise almost 5,000 acres where more than 10,000 people live and work cultivating vegetables and flowers. It is estimated that their yearly output is about 40,000 tons of fresh agricultural products to be consumed mainly in Mexico City, much like 500 years ago…

Who would guess that within one of the largest cities in the world would lay such a complex ecosystem? An ecosystem that has survived time, the pressure of urban growth, and that allows the preservation of important bodies of water and biodiversity. A resilient ecosystem that has a positive impact on the quality of the air and a buffer to the climate of Mexico City. 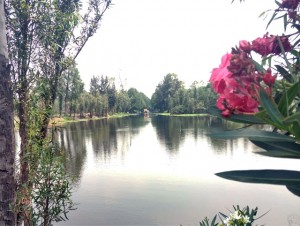 A typical channel in Xochimilco.

Xochimilco’s chinampas and channels are today also a tourist attraction. Canoes—of the same centuries’ old design—called trajineras, can be hired by the hour for groups to tour around. Food, drinks and live music are available from other canoes navigating in parallel or tied to the canoe you are riding provide the service(s). 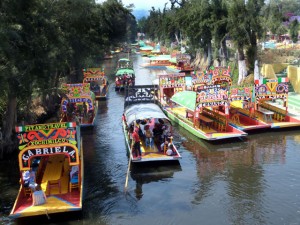 Trajineras: colorful is an understatement.

My favorite scene—and dish—is a lady making enchiladas—can’t say on the spot because we are cruising—on her canoe, tied up to ours. The lady is by herself, with a live fire frying griddle, passing the enchilada plates as they are being finished to our canoe. On the other side, also navigating in parallel, a canoe with mariachis or a norteño band playing folk songs. And beer and Tequila flowing as the choice of beverages… This has to be my most memorable experience in Xochimilco… 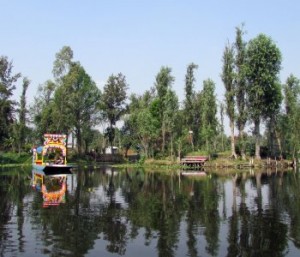 It is a scene best enjoyed in person.

Chinampas—as well as Milpas—thus are internationally recognized as the foundation of Mexican food production, biodiversity and sustainability, and remain common practices today! And for many, aside from being a source of joy and happiness, they are also the mothers of the regional cuisines of Mexico…