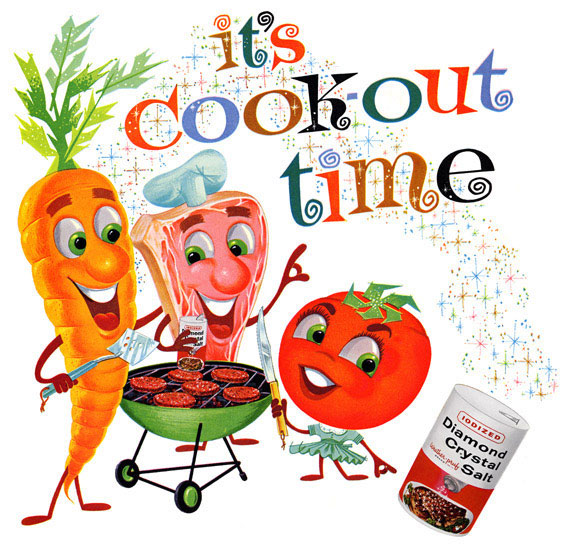 Old BBQ ads, much like their booze and tobacco cousins, look different in the glasses of hindsight. The reason being, you’re seeing them with decades of history clinging to them and not fresh off the presses. For you kids following along at home, presses were these things that “print media” came off of back in ancient times before there was an internet. Yes, I know, it’s shocking that at one point in human history we murdered trees and printed cigarette ads and porn on their ground flesh. But it’s that sort of hardcore ruthlessness that’s made us the apex predators of apex predators. So suck it, the rest of nature.

But we’re talking about barbecue ads from way back when. Glasses of hindsight and all of that. Here are ten old print ads from the 1940s to 1960s, that I think you’ll find as amusing as I did.

Right around the time Hitler was playing the world’s most fucked up Risk game, Old Crow Kentucky Straight Bourbon Whisky ran this ad. What got me was the depiction of a backyard barbecue as a very formal affair. If you think getting grease and sauce out of your “Show Me Your Buns” apron is a bitch, imagine trying to clean one of these Old Timey cravat thingies in 1895.

If you haven’t heard of Edward Arnold, that’s okay. He was a very prolific star of film, radio, and TV who worked from 1907 to 1956. That was a very long time ago. Unless you’re a film nerd, you probably wouldn’t know that. Regardless, his mug in this old Canada Dry ad paints him as some sort of an outdoor griller. Whether he was or not is up for debate but advertisements like this are what influencer media was like way back when: media celebrities pimping their images to sell product.

Nevermind the gender role stereotyping in this 1947 ad. Who serves Schlitz in champagne flutes at a barbecue?

Whisky and beer companies weren’t the only booze makers using barbecue to sell product. Wine companies also saw the value in backyard barbecue as an American pastime. Petri Wine was a very big deal in the late 1940s and by 1953 they were the largest domestic wine producer in the United States. Their wine may be good but once your weiner goes Uncle Owen and Aunt Beru, nothing’s going to make it taste good in someone’s mouth.

And y’all thought More Bounce to the Ounce started with a song by Zapp & Roger in the 1970s. What you don’t know is that the old funk song that’s been sampled by, oh, everyone, was itself taken from this Pepsi advertising campaign of the 1950s.

Gene Kelly was a huge star throughout most of the 20th Century. By some accounts he was also quite the entertainer at home. It’s no wonder, then that Durkee chose him for this 1955 ad, showcasing what they brought to the backyard barbecue table. Notice how all the “new” recipes are basic grillfest staples now, though.

This era was also the Golden Age of Cartoons. Walt Disney, Warner Bros, and Hanna-Barbera ruled the animation roost at this time, from feature films to Saturday morning kids’ shows. Ad houses were hip to that (Walt himself came from that world) and whored cartoon imagery to great effect. They were so shameless, in fact, that the twisted image of cartoon food cooking itself was perfectly normal. I mean, what do you think that spicy little tomato is going to do with that big ol’ butcher knife?

Yes, fellas, while you’re outside grilling in the rain, your wife can’t wait to stand next to you holding an umbrella over her man. And while you’re at it, she’ll even light your cancer stick. Why? Because nothing goes better with barbecue smoke than cigarette smoke…

Jonathan Winters is what Robin Williams would have been like had he been born a few decades earlier. In fact, Winters was a huge inspiration and hero to Williams. Maude Frickert was one of Winters’ many comedic characters.