Q: What do you think about cooking on a salt slab and what would you use one for? 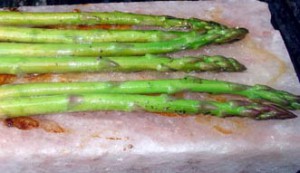 A: Salt slab cooking has become the latest “trendy” way to cook food… similar to the way plank cooking and “stone grill” cooking was a few years ago. The concept is simple: you preheat a block of Himalayan salt to a screaming high temperature on your grill, oven or stovetop and cook whatever you like. During cooking, the food picks up salt from the block so you don’t need to salt your food before cooking.

The blocks may also be frozen and used for cold-food presentation such as caviar, sashimi, ceviche, smoked salmon or fresh fruit. 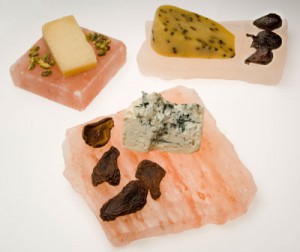 Use chilled salt slabs for serving cheeses and other munchies. Courtesy of poshsalt.com

The first food I prepared with a salt block was a Szechuan citrus scallop and shrimp appetizer (this could also be an entrée if you increase the number of shrimp and scallops per serving). Following the manufacturer’s recommendations I placed the dry, room temperature salt block on an unheated grill and turned the grill on to its lowest temperature allowing the salt block to warm (this also removes any moisture that might be on the block). Then I slowly increased the grill’s temperature until the salt block reached the desired temperature… for me the process took about 45 minutes until the block reached 550 degrees F. The key is to slowly increase the temperature, otherwise the block may shatter.

Once the block is at the desired temperature, add the food and cook until done. For the shrimp and scallops, it only took about two or three minutes per side until they were done. 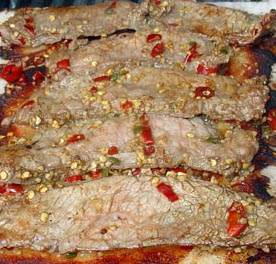 The second item I prepared was classic Thai street food: Crying Tiger Beef. But instead of cooking a whole piece of marinated skirt steak (the traditional method), I bias-sliced a partially frozen steak and marinated the sliced beef with reduced-sodium soy, Thai chiles, ground coriander, lime juice, fish sauce, garlic and sugar for two hours in the refrigerator. When the block was hot, I quickly seared the steak strips to medium-rare, about three minutes per side. (The longer food stays on the block and the higher the food’s moisture content the more salt it will pick up from the block.)

To accompany the steak, I grilled marinated asparagus on the salt block until crisp-tender and served it with Jasmine rice.

Allow the block to cool to room temperature before removing from the grill and cleaning.

Cleaning the block is straight-forward. Rinse the block under running water and brush the block with a nylon brush or green scrubby and allow the block to air dry on a wire rack. I store the block between two side towels.

(Serves two as an appetizer)

Combine 1 1/2 tablespoons of the lime juice, the lemon juice, peppercorns and olive oil in a small container. Add the shrimp and scallops and marinate, refrigerated, for one hour. Drain the seafood and discard the marinade.

Garnish the seafood with the lime and lemon zest and drizzle with the remaining lime juice. Sprinkle with additional crushed peppercorns if desired.