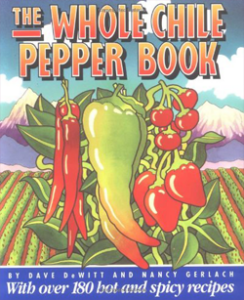 It is ironic that the chile cuisines of the countries of South America, where the chile pepper originated, are not as complex as those of Mexico, or even Thailand, for that matter. The people of the Andean region of Peru, Ecuador, and Bolivia still eat basically Incan food that has been only slightly modified by the meats and vegetables introduced by the Spanish. But despite the basic nature of the cuisine of this region, chiles are used extensively, and they are among the hottest in the world.
There are several chiles of choice in the Andes, where they are generically called “Aji” or “Uchu.” The first and foremost chile is the specific Aji, Capsicum baccatum, which is often called “Aji amarillo” because of its yellow fruits. One variety of Aji, puca-uchu, grows on a vinelike plant in home gardens because Ajis are rarely commercially cultivated in South America. The Ajis are extremely hot, rating an 8 on the Heat Scale.
Another favorite chile in the Andes is Rocotillo, a variety of Capsicum chinense and a close relative of the Habanero — though it is considerably milder. It is used in a similar manner to Bells and is sometime called a Squash pepper. Such terminology is confusing because there is a variety of Capsicum annuum called “Tomato” or “Squash” that is cultivated in the United States. The Rocotillo is served fresh as a condiment or garnish, or is cooked with beans and stews, or is spread over grilled meat. 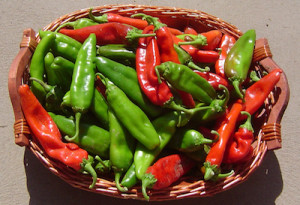 Another species, Capsicum pubescens, is beloved in the region and is called Rocoto. The cherrylike pods of the Rocoto are as dangerously hot as the Ajis — also rating an 8 on the Heat Scale.
In fact, they are so pungent that there is a Peruvian expression about them, “llevanta muertos,” meaning they are hot enough to raise the dead. In addition to their culinary uses, the various South American chiles are employed in other ways. Mothers who are descendants of the Inca in Peru coat their nipples with chile juice or powder to discourage their babies from suckling during the weaning process. Perhaps the oddest usage of the Ajis is in southern Colombia, where Indians mix powdered chile with cocaine before snorting it. Supposedly, the chile increases the mucus secretions and somehow heightens the stimulating properties of the drug. Both practices sound remarkably painful, especially considering the pungency of most South American chiles, and neither is recommended. However, they do give an indication
of just how pervasive chiles are in Andean culture.
Such pervasiveness is also illustrated by the reputation of certain cities for having particularly fiery cuisines. Arequipa, in southern Peru, is probably the hottest city in South America and is in the competition for the title of hottest city in the world. There, the dishes are so hot that restaurants in Lima list menu items as “arequipeno,” meaning they are from Arequipa and diners should use caution when eating them.
Some examples of fiery dishes from Arequipa include ocopa, potatoes covered with a hot cheese and peanut sauce plus a yellow Aji chile paste; Rocoto chiles stuffed with cheese or sausage; and our recipe for Papas a la Huancaina, another dish with an Ajf-spiced cheese sauce. The use of peanuts in hot chile dishes in Arequipa is interesting because it anticipates some African dishes with similar ingredients. The peanut, like the chile pepper, is a native of South America (a similar nut, the Bambara groundnut,
is a native of Africa) and has been found in Peruvian mummy graves in Ancon. The combination of the two is a classic example of the addition of chile to spice up an essentially bland food.
In the Andes, Ajis or Aji salsas are used to add heat to other bland foods such as potatoes and manioc. There are several kinds of Aji salsas, but the most important of them is Aji molida, which is prepared by mixing the fresh chiles with ground herbs, onions, and water. On the coast, Peruvian fishermen mix the
Ajis with olives, olive oil, and chopped onions, or add them to raw fish to create ceviche, a dish that now appears, with variations, all over the world. Our recipe for Ceviche with Ajis combines native fish and Aji chiles with bitter oranges and onions imported from the Old World.
Other Andean dishes also demonstrate the influences of both the Spanish and Incan cultures. Chickens spiced with Ajis reflect the combination of native chiles with European-introduced chickens. It is probable that a pre-Columbian version of this dish combined the chiles with birds such as the macuca, a large jungle fowl. Another famous Andean dish is illustrated by our recipe for Peruvian Anticuchos, marinated and grilled beef hearts, which are as common in Lima as hot dogs are in the United States.
In Chile, various sauces are used to spice up bean, potato, and chicken dishes. One simple sauce is color, which is made by sauteing garlic, paprika, and dried red chiles in cooking oil. Its name alludes to its bright red-orange — well, color. Another sauce is pebre, which combines a red chile paste with olive oil, vinegar, cilantro, onions, and garlic. In other parts of South America, where European influences had a greater impact upon the cuisines, chile peppers are combined with a wider variety of Old World foods.

And if you the recipes mentioned above, you’ll find them here, in The Whole Chile Pepper Book.