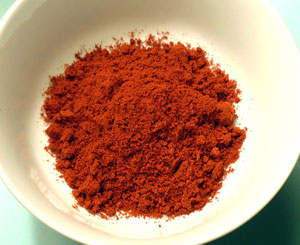 There is a minor debate over the arrival of the imported Capsicums from the Western Hemisphere into Hungary and surrounding areas. Some historians credit their spread to the invasion of the Ottoman Turks into Central Europe. The armies of Sulieman the Magnificent conquered Syria and Egypt in 1516-17, Yugoslavia in 1521, and Hungary in 1526. The year 1526 is the date usually given for the introduction of paprika into Hungary by the Turks, but this date is only plausible if the Turks had somehow acquired chiles from either Spanish, Italian, or Greek traders in the Mediterranean.

Zoltan Halasz, author of Hungarian Paprika Through the Ages, believes: “Most probably the Turks got into the possession of Paprika through Italian intermediaries, and since a great many nations fond of gardening lived on the Balkan Peninsula, which was under Turkish occupation, the cultivation of the spice, winning favor among all these peoples, soon became widespread.”

A more likely scenario holds that the Turks first became aware of chile peppers when they beseiged the Portuguese colony of Diu, near Calicut, in 1538. This theory suggests that the Turks learned of chile peppers during that battle and then transported them along the trade routes of their vast empire, which stretched from India to Central Europe. According to Leonhard Fuchs, an early German professor of medicine, chiles were cultivated in Germany by 1542, in England by 1548, and in the Balkans by 1569. Fuchs knew that the European chiles had been imported from India, so he called them “Calicut peppers.” However, he wrongly assumed that chiles were native to India.

So, sometime between 1538 and 1548, chiles were introduced into Hungary, and the first citizens to accept the fiery pods were the servants and shepherds who had more contact with the Turkish invaders. Zoltan Halasz tells the tale: “Hungarian herdsmen started to sprinkle tasty slices of bacon with Paprika and season the savoury stews they cooked in cauldrons over an open fire with the red spice. They were followed by the fishermen of the Danube…who would render their fish-dishes more palatable with the red spice, and at last the Hungarian peasantry, consuming with great gusto the meat of fattened oxen and pigs or tender poultry which were prepared in Paprika-gravy, professed their irrevocable addiction to Paprika, which by then had become a characteristically Hungarian condiment.”

Editor’s Note: We’ve got a full-on pepper dossier on paprika here as part of our series on chile pepper profiles.