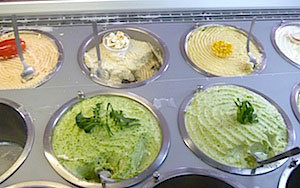 It was just another normal day at the Gelateria Matteo.  It was early, so there were very few customers, giving the gelato master Matteo Napoli time to focus on the two gelatos he was making: fig and onion. Yes, you read that correctly. Onion is just one of many verdura (vegetable) ice creams he makes for his shop; other flavors include tomato, carrot, bean, radish, cucumber, and, of course, wild fennel.  These are merely the normal gelatos—others feature pizza, popcorn, shrimp, and fish-risotto.

The gelateria is in the town of Lancusi, about hour south of Naples on the way to Salerno. Mary Jane and I were on a tour of the unique foods of southern Italy and our guide was Fabio Tonalini, a wine and grappa maker from Beccaria, outside of Parma.  The “tour” was actually a detour from our real job down there in the south—making sales calls to promote “Spirit of Habanero” grappa with my signature on the label. 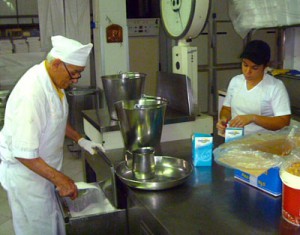 Matteo in his laboratory

Matteo Napoli is probably the most famous gelato maker in Italy, and I was honored to meet him and taste a few of his 100 often-weird gelatos.  He does, in fact, have many traditionally flavored gelatos.  I don’t know about you, but I get tired of eating blood orange gelato day after day, so I tried the fig.  Excellent.  And the tomato…not too bad.  The salt cod gelato?  Didn’t try that one.  After all, we had arrived right after breakfast.  I didn’t get to try his chile pepper one—gelato al peperoncino—because he was out of it and needed to make more, if only the right pepper variety could be found.

Recently, a British buyer asked him to supply an astonishing 2,000 pounds of gelato per week for ice cream shops in the U.K.  “Of course I said no,” said Matteo. “Either you do something properly or you don’t do it at all. The great ills of the world are caused by money—and sex and religion.”  But obviously they’re not caused by gelato, which Matteo has been making since 1962.
I bought a copy of a book about him, Il Gelato Secondo Matteo, by Carlo Correra and it had some recipes for readers to try. The recipe below is from Correra’s book. Buon appetito!

Editor’s Note: Correra’s book is in Italian, and can’t be bought through Amazon.com, but Making Artisan Gelato by Torrance Kopfer is a thorough, well-reviewed book about this delicious and versatile dessert.

Combine all the ingredients except for the cheese in a bowl, whisk well, and then transfer to a pot.  Heat the mixture to 185 degrees F. and stir well until thickened, about 5 or 6 minutes, taking care that it does not boil.  Remove from the heat and allow to reach room temperature.  Mix in the cheese and transfer to an ice cream maker, then follow the manufacturer’s instructions.