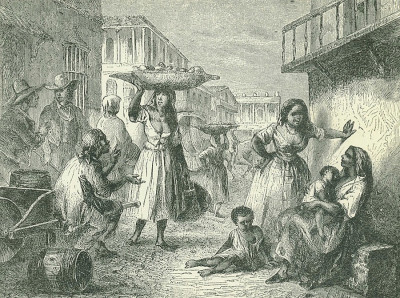 Although curries in some form appear in the cuisines of most of the Caribbean, they are particularly prevalent in the countries where the East Indian population is the greatest: Jamaica, Martinique, and Trinidad and Tobago (T&T). 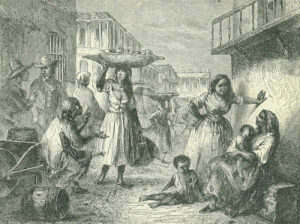 Caribbean marketplace in the late 1800s.

In 1838, four years after slavery was abolished in T&T, the food history of the two islands began to change profoundly.  That year, the mandatory, four-year post-slavery apprenticeship ended and some 20,000 slaves who worked the enormous sugar cane plantations left the estates and became squatters–resulting in an enormous labor shortage.

That shortage was filled by freed slaves from other islands, plus a huge influx of indentured laborers from India.  Beginning in 1845, a mass migration of workers from India over the next seventy-two years increased the population of Trinidad by 145,000.  By the 1940s, the East Indian influence was so prevalent that travel writer Patrick Leigh Fermor wrote: “Wide tracts of Trinidad are now, for all visual purposes, Bengal.”   Because the East Indians were thrown together in a strange land and were forced to share tasks equally, divisions of caste and religion were soon dissolved.  The Hindus, who formed the bulk of the diaspora, began to eat beef out of necessity. Unlike the Africans before them, the East Indian immigrants were allowed to keep their language, clothing, and food.  Two animals that immigrated with them were the water buffalo–useful for heavy labor–and the white, humped cattle that provided the milk for the beloved yogurt and butter, which was made into ghee.

Many East Indian foods and cooking techniques were introduced into T&T, notably curries and rice (rice is still grown in Trinidad today).  Curries have become enormously popular in the country, as noted by calypso writer Daisann Mclane: “Without access to their curry,” she wrote, “Trinidadian cooks would be as lost as Sicilians without fresh garlic.”  There are several incarnations of curry.  First, there are masalas, which are spice blends usually without chile powder or turmeric–these are the mildest blends that are added to cooked meats and vegetables.  The phrase garam masala literally means “hot spices.”  Amchar masala, a blend of coriander, fenugreek, fennel, mustard, and cumin, is commonly used to season cooked green mangos (amchar is the Hindi word for mango).

Then there are commercial curry powders, such as the Raja Jahan brand, which contains coriander, cumin, turmeric, fenugreek, celery seed, fennel, and mangril, a mystery ingredient variously identified by the locals as curry leaf or poppy seeds.  Most likely, the word is a corruption of the Hindi word mangrail, which is onion seed.  Other popular commercial curry powders are Turban (manufactured since 1929), Chief (which contains black pepper), and Indi, a Guyanese brand containing some hot peppers. A typical commercial mixture usually contains varying amounts of coriander, cumin, turmeric, fenugreek, celery seed, and fennel.  The curry powder capitol of Trinidad and Tobago is Tunapuna, a town about halfway between Port of Spain and Arima.  Daisann McLane vividly described it in 1991: “Clouds of roasted cumin and turmeric, garlic, coriander, and those acidly hot Caribbean peppers…simply by breathing, one was exposed to hazardous levels of piquant longing.”

Most of the curry powders made today are much milder than those of India because the early cooks lacked powdered hot peppers.  However, hot pepper sauces are often added to curried dishes at the table.  Some cooks still use old-fashioned curry pastes, which usually have Congo peppers (a Habanero relative) added to them, and our recipe for Trinidadian Curry Paste (here) is a typical example.

Every imaginable foodstuff is curried in Trinidad and Tobago, including mangos, pumpkins, eggplants, potatoes, green tomatoes, okra, chicken, fish, shellfish, beef, pork, goat, and lamb.  These curries are commonly served in roti shops which dot the two islands.   The curried mixture is placed upon the flat, thin roti bread, and then is wrapped up into an easy-to-eat package of curry.

Mary Jane and I toured Trinidad and Tobago in 1992 and dined on nine different curried fillings for the roti bread at the Patraj Roti Shop in San Juan: fish, beef, chicken, goat, conch, shrimp, liver, duck, and potato (at left).  The fillings were wrapped in the bread or were served in bowls accompanied by torn up bread called Buss-Up-Shut, which is slang for “burst up shirt,” because the bread resembles torn up cloth.  The curry itself was not spicy, but the Congo pepper hot sauce served in squeeze bottles solved that problem. They also received an extensive curry cooking lesson from expert cook Nancy Ramesar, who demonstrated not only the methods for making T&T curries, but also showed them how to make a variety of accompaniments, such as Curried Pholourie, recipe below.

Curried Chicken combined with Roti (also below), is probably the most typical Trinidadian curried roti dish, while Trinidadian Curried Lobster is reserved for more special occasions and is not served wrapped in the bread.  Sophisticated citizens of Trinidad, who have traveled outside the country, realize that there is more to curry than just the T&T style, but any changes are unlikely.  One restaurant owner told us she was quite disappointed when Gaylord’s, a restaurant on Independence Square that served authentic East Indian curries, failed because the locals said: “This isn’t curry.”  Noted food writer Julie Sahni believes that “curry is such an integral part of Trinidadian cuisine that its Indian origin is actually being lost.”  She was amazed when a Trinidadian saleswoman in a curry factory asked her: “Are you from India?  Do they have curry powder in India?”

The East Indian population of Jamaica is considerably smaller than that of T&T, but their curries are also esteemed.  The first East Indians arrived in Falmouth aboard the Athenium in 1843, and within fifty years curries had risen to prominence on the island. The Jamaica Cookery Book, published in 1893, offered several curry recipes, including a simple but ingenious tropical curry sauce: coconut jelly (the immature center of a green coconut) was boiled in coconut water with cinnamon and curry powder until thick.

The most popular curry dish in Jamaica is curry goat (not “curried goat”).  In fact, according to Helen Willinsky, author of Jerk: Barbecue from Jamaica, it is “one of our national dishes.”  She wrote: “We always serve it for our special occasions, and it seems to be one of the best-remembered dishes by tourists.” The first time I tasted curry goat in Jamaica, in a restaurant frequented by locals in Ocho Rios in 1984, he had to be careful not to swallow numerous sharp slivers of bone. In a truly authentic recipe, the goat meat is chopped up–bones and all–because Jamaican cooks believe that the marrow in the bones helps to flavor the dish.  The goat was cooked in a large, cast-iron kettle over a wood fire in the backyard of the restaurant.

The second time I tasted curry goat in Jamaica, in 1993, the venue was a bit fancier, but the taste was the same.  That time, the goat was prepared by the chef of the Ciboney Resort (also in Ocho Rios) and was served at a rather elegant buffet at a beach party.

In the early days, curry goat was considered to be a masculine dish, and there was a certain ritual involved with its serving.  Zora Neale Hurston, an American anthropologist who traveled extensively in Jamaica in the 1930s, was fortunate enough to be invited to an all-male curry goat party.  “On to the Magnus plantation and the curry goat feed,” she wrote.  “This feast is so masculine that chicken soup would not be allowed.  It must be soup from roosters.  After the cock soup comes ram goat and rice.  No nanny goat in this meal either.  It is ram goat or nothing.” In my recipe for Jamaican Curry Goat rams are not so critical–either gender of goat is permissible.

In the French Antilles, the word for curry is colombo, named for the capital of Sri Lanka.  A typical colombo, such as the Christmas specialty, Pork Colombo from Martinique, begins with a Ceylon Dark Curry Powder is made into a paste that contains, in addition to some standard curry spices, crushed fresh garlic, ginger, and habanero chiles.

This story was excerpted from Dave DeWitt’s World of Curries. If you like what you see, pick up a copy at his Digital Bookstore here.