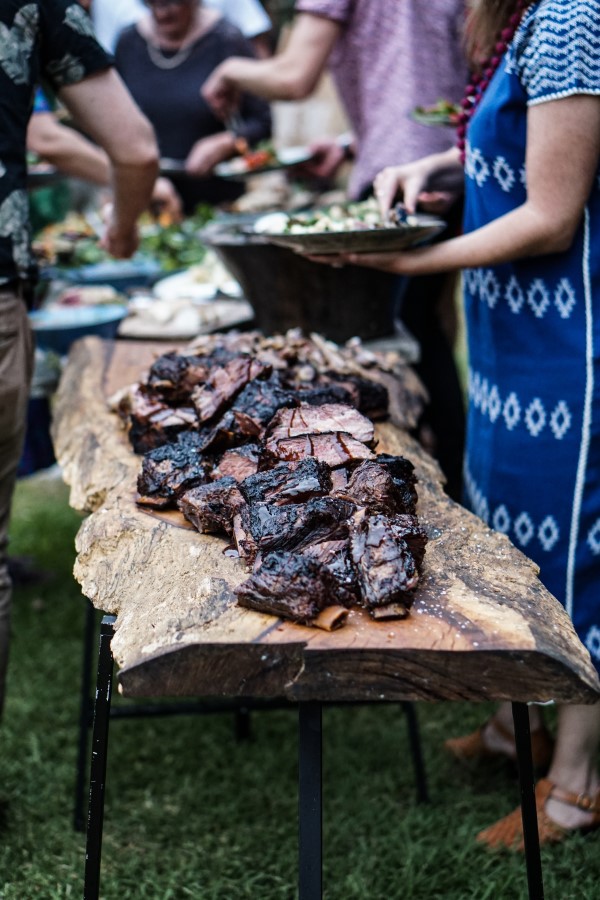 Do we really have to state in print not to use construction lumber scraps in your smoker or barbecue? Well, here we go. Most of these scraps are resinous pine or fir; some, like plywood, are treated or contain glue. All are useless for cooking or smoking purposes. And under no circumstances should you grill or smoke over woods such as cottonwood, willow, pine, or poplar. Stick to the woods listed on the following pages, and you’ll produce great heat and fragrant smoke. When you consider smoking foods, think of
the wood as a spice to add flavor rather than just a fuel. 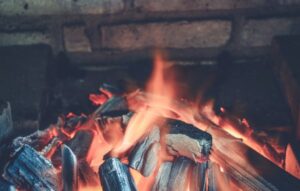 The woods that work best for grilling and smoking are hardwoods, particularly (for some unknown reason) the woods of certain fruit and nut trees. We should point out that any of these woods can be used to smoke any meat—we are just mentioning the meats these woods are commonly linked with. Some woods are available locally only where they grow, such as alder and pecan. But most woods are available by mail order or at your nearest barbecue supply store. In most cases, the hard remnants of the fruits and nuts of the hardwood trees can also be used in the smoking process. Specifically, we mean peach pits and nut shells, but not acorns. 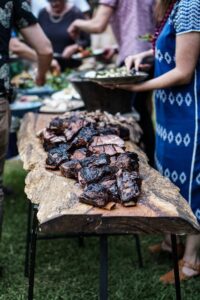 Remember that the above woods can be mixed in the smoking process to add another dimension to barbecue. Some cooks here in the Southwest mix a little of the stronger mesquite in with pecan or apple wood. Other woods used in the smoking process include almond, black walnut, juniper (slightly resinous), and locust. There are other woods that you can add to the heat source as flavorings, but we don’t recommend smoking with them for lengthy periods of time. They produce smoke that is very intensely flavored. If you like the flavor of coconut, for instance, then add a coconut hull to the fire when you smoke or grill fish. Also, grapevines make a tart smoke that can overwhelm poultry or lamb. Use it sparingly.

Herbs, such as oregano, sage, thyme, marjoram, rosemary, and basil, used both dried and fresh, can imbue the meat being smoked with their own particular flavor profiles. The thick, woody, stems of rosemary and sage can be used as well as the branches and leaves. As with grapevines, a little
goes a long way.

Incidentally, do not burn chile pods to flavor grilled or smoked meat. The pods produce an acrid smoke so irritating that Native Americans burned huge piles of them in an attempt to use gas warfare against the
invading Conquistadors. It didn’t work with the Conquistadors, but it will ruin your Cornish game hen. Use the chile in the rubs to flavor the meat or in the basting sauce or barbecue sauce you serve on the table. Or maybe in all of them.

To start the wood fire in the smoker’s firebox, do not use petroleum based starters such as a charcoal lighter. They can impart nasty odors. Instead, build the fire in precisely the same way you would in your fireplace: crumpled newspaper, kindling made from thin slivers of the wood you are using, and large pieces of wood on top. Allow the smoker to reach the optimum temperature and make sure the smoke is gray rather than black before you place the meat on the rack or grill for smoking.

Editor’s Note: This excerpt comes from Dave DeWitt’s book, Barbecue Inferno. Pick up a copy of it and some of his other works right here.