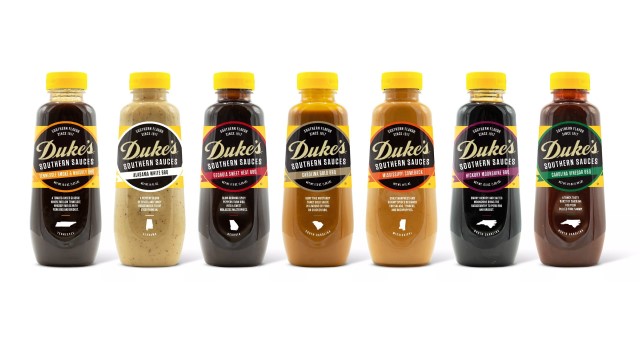 Duke’s, the premium southern brand that has set the bold standard of mayonnaise since 1917, announces the launch of a new Duke’s Southern Sauce flavor – Carolina Vinegar BBQ.

“Each Duke’s Southern Sauce is distinct to the region that created it,” said Maria McAllister, Duke’s Marketing Operations Wrangler.  “We love bringing unique regional sauces that are revered throughout the South to our fans and customers.  Carolina Vinegar is an authentic Piedmont-style BBQ sauce that is tangy, sweet, and spicy.”

Duke’s Carolina Vinegar BBQ is a classic Piedmont-style BBQ sauce that originated in western North Carolina during WWI where barbecue stands were cooking just parts of the hog, primarily the pork shoulder, instead of the whole hog.  This thin, vinegar-based sauce has a touch of sweetness from tomato paste, along with tangy vinegar & spices, yet the delicious pork essence still comes through. This style of BBQ sauce is traditionally used as a finishing sauce or served alongside pulled pork.

In addition to the new flavor, Duke’s Southern Sauces’ packaging also got a revamp, including the Duke’s signature yellow cap and black medallion.  The updated packaging is a continuation of a transformation for the brand that began in 2020.  Milestones of this transformation include product innovation, like the southern sauces, flavored mayos, dressings, and southern-style mustards; the introduction of the Duke’s It’s Got Twang! campaign; and the sponsorship of the Duke’s Mayo Bowl in Charlotte, NC, known for its viral moments like mayo baths and trophy breaks.

“We want it to be clear to the consumer that these sauces are cut from the same cloth as the beloved mayonnaise,” said Rebecca Lupesco, Duke’s Brand Manager of Mayohem. “The new packaging both brings the sauces into the Duke’s family of condiments and makes the product pop on shelf.  And when shoppers see the yellow cap, they know they’re getting the best.”

Duke’s Southern Sauces will be supported by a new campaign that works with content creators, like California-based comedian and TikToker Kendahl Landreth, who turn into their viral southern characters after tasting a southern sauce – showing how Duke’s Southern Sauce Makes Anything More Southern.  See HERE.

As with all Duke’s products, Duke’s Southern Sauces are made with only quality ingredients, no high fructose corn syrup, and are kosher.  Alabama White, Georgia Sweet Heat, Tennessee Smoke & Whiskey, and Carolina Gold are also naturally gluten-free.  The sauces are available in 14oz – 17.5oz squeeze bottles and retail between $3.49 and $3.99.

For more information, or to shop for new products, visit dukesmayo.com or follow @dukes_mayonnaise on Instagram and show how you’re upping your BBQ game with Duke’s Southern Sauces by using the #trysometwang hashtag.