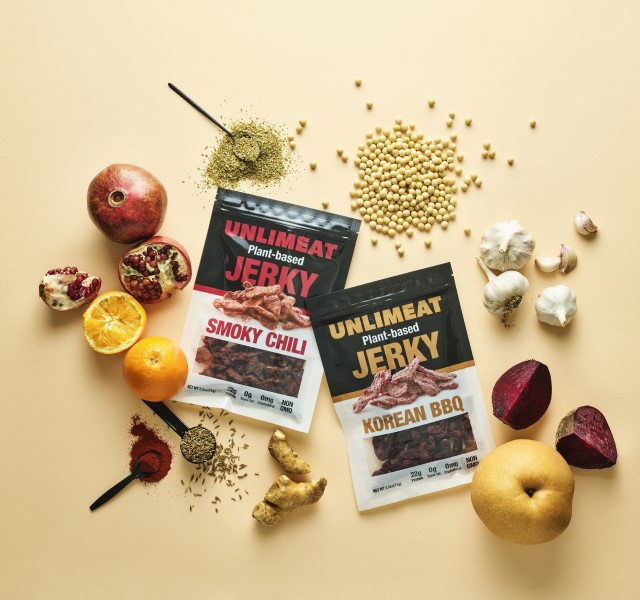 When  I was a kid, plant-based jerky consisted of dried grass that you usually ate after a bicycle jump gone wrong. Times they are a-changin.’ Now UNLIMEAT, a plant-based meat brand from Korea, is launching its plant-based jerky in the US market via Kickstarter.

UNLIMEAT is the market leader in Korea’s alternative meat market, with its first product, plant-based Korean BBQ made from upcycled food, having entered the market in 2019. The company has expanded its product line to include plant-based pulled pork, mince, burger patties, meatballs, cheese, and dumplings and has a huge fanbase in Korea, where the vegetarian market has recently begun to bloom.

This crowdfunding is an event to introduce their hit UNLIMEAT plant-based jerky, which sold out immediately on its April launch in Korea, to the US market. UNLIMEAT plant-based jerky is made using non-GMO soy protein, wheat protein, and other plant-based ingredients to create the same chewy texture as real meat. It isn’t made with any artificial ingredients or flavors: beets and pomegranates are used for its coloring, and citrus extracts are used as natural preservatives.

UNLIMEAT plant-based jerky contains 9g of protein per 1 serving(30g), the same as real beef jerky, and contains no cholesterol or trans-fats, so it is perfect for those who are on a diet or who love exercising. It is also good as an outdoor snack during hiking or climbing thanks to its easy portability. Currently, two flavors have been released: Korean BBQ flavor (made using a traditional Korean barbecue recipe), and Smoky Chili (flavored with cumin and pepper).

UNLIMEAT Plant-based jerky will debut on Kickstarter, with a pre-launch on May 10th and the official launch of its month-long Kickstarter on May 31st. Anyone ordering our jerky during the Kickstarter will receive a 30%-38% discount. An UNLIMEAT representative commented, “This is the first time we’ve introduced our Asian-inspired plant-based jerky to the US market. Korean BBQ is becoming popular in the USA, so we’re hoping this original, traditional Korean BBQ recipe straight from Korea will be popular. We hope we’ll attract a lot of attention from American consumers.”