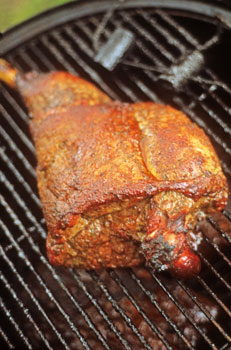 Q: Hi Chef! I love your articles on the Burn! blog but I don’t have any fancy offset or vertical smoker. Can I make real barbecue without one of those?   —Dwayne

You can make BBQ pork butt on a kettle grill or a gas grill. Photo by Rick Browne

One of the true barbecue “secrets” is developing a heavy smoke and cooking meat at a low temperature, allowing it to tenderize. One method is to use a water or dry smoker but for those without a true smoker, a kettle grill or even a gas-fired grill can be used.

Plan on the following cooking times for smoke-cooking: briskets and pork butts, 1 1/2 to 2 hours per pound; spare ribs, about four to five hours; and poultry, about one hour per pound. Meats should be at room temperature before beginning the barbecue.

Smoking In A Kettle Grill

Smoking is easy to do in a kettle-style grill. The process involves using indirect heat and adding wood chips to banked coals.

At least an hour before you plan to start cooking, place wood chips or chunks in water or wine to soak. Estimate two chunks of wood or a good handful of wood chips for each hour of smoke-cooking time. If you have any soaked wood left over, it can be dried and used another time. 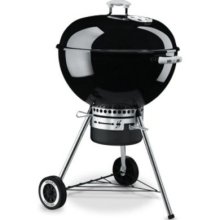 The lowly kettle grill can be used to make great BBQ.

Build the fire about 40 minutes before you plan to start cooking. Remove the cooking grate from the covered grill and build a pile of about 25 to 30 charcoal briquettes on one side of the fire grate; light them and let them burn down to a hot glow, covered with gray ash. Leave only one of the bottom air vents open, directly under the charcoal. Place an aluminum loaf pan filled two-thirds full of water, wine, or cider across from the charcoal. Toss in a few chopped onions, chopped heads of garlic, and a couple of chopped carrots.

Spread the hot coals with a pair of long-handled tongs to make a bed for the wood chips or chunks; place a good handful of chips or two chunks of wood directly on the hot coals. Replace the cooking grate on the grill and place the meat over the drip pan, on the opposite side of the grill from the fire source. Cover the grill, with the top vents fully open and directly over the meat.

When smoke-cooking food that takes more than an hour, you will need to add more charcoal to the fire to maintain heat. About 30 to 40 minutes after you have started cooking, start a supplemental bed of charcoal burning in a small grill or charcoal chimney. This will ensure a steady supply of hot coals. For a very long smoke-cooking period (six to eight hours), add eight additional briquettes every 45 minutes or so.

Throughout the smoke-cooking process, watch for smoke escaping from the top vents. When it slows down or stops, add more wood to the fire. When adding extra wood or charcoal to the fire, work quickly with long-handled tongs: each time you take the lid off the grill, it will add 10 to 15 minutes of extra cooking time.

Smoking In A Gas-Fired Grill

A gas-fired grill can be used to create barbecue; it’s somewhat less work but, is also less effective 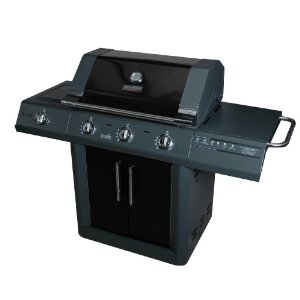 With the right technique, you can even smoke meat in a gas-fired grill.

for smoking than a charcoal grill,

Pre-heat the grill on high for 15 minutes, using only one burner of the grill (assuming you have a two- or three-burner grill). Take a large handful of drained wood chips and securely package them in heavy-duty aluminum foil. Poke several holes in the foil to allow smoke to escape. Remove the grill grate from the pre-heated side of the grill and place the wood chip package atop the lava rocks or grill plate but not directly on the gas burner.

On the unheated side—where the meat is to go—place an aluminum loaf pan filled two-thirds full of water, wine, cider, vinegar or any combination thereof below the grill grate. Toss a few chopped onions, chopped heads of garlic, and a couple of chopped carrots into the pan.

Close the lid and lower the gas control to its lowest setting. Once smoke begins to generate, place the seasoned meat over the drip pan and cook until the desired internal temperature is reached. Replace the wood chip packet with new packet of drained chips every hour or so.

ASK CHEF MIKE YOUR OWN QUESTION ABOUT GRILLING, CHILES, GADGETS, OR OTHER FOOD AND COOKING TOPICS. SEND HIM A MESSAGE HERE.