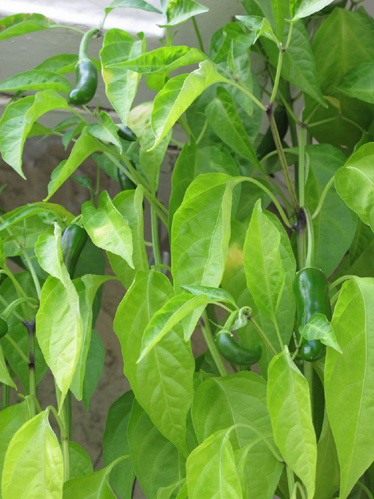 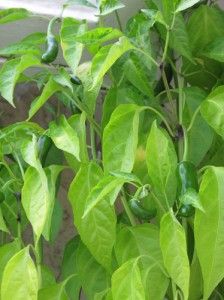 Here in Los Angeles, we don’t get autumn. Not a sane one, anyway. The weather that passes for fall here is schizophrenic—hot enough for shorts at midday, cold enough for a sweatshirt at night. In the winter it’s even weirder. Sometimes the weather can’t make up its mind whether or not it wants to freeze you or fry you. So I was understandably concerned about my little jalapeño experiment.

Luckily, it turns out I needn’t have worried. The white flowers bore fruit! Not the 25-35 peppers per plant you’d normally expect, but that’s fine. I started out with over 30 plants in my Topsy Turvy. Even if it had yielded 900 pods, what the hell would I do with that many peppers?

Between planting the seeds late in the season on a whim, overloading my planter when I moved the plants into it, and generally going about all of this on the fly, I’m actually quite happy with the results. So far I’ve gotten 27 jalapeños out of the deal, and I had a lot of fun watching the plants grow and bear fruit. It’s been enjoyable enough that I’ve started looking into growing superhots and I may even set up a small scale beekeeping operation in the backyard. Just call me Farmer Mark.

Next time, I’ll most likely get more hanging planters, though. I’m going to do a lot more research on the Fiery Foods SuperSite so I can make a much more serious go at this in the spring when Southern California makes up its mind about the weather. 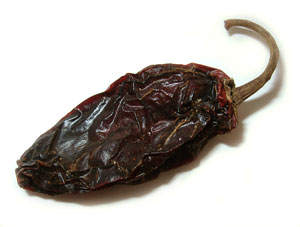 Real chipotle peppers aren’t those things you find chopped up in ancho sauce. That’s just where they usually end up. Chipotles are simply smoked jalapeños. I like to take a dozen fresh pods, cut off the stems, slice them lengthwise, and smoke them for an hour or two (insert “but how do you keep them lit?” joke here). You then grill them over direct heat until the skin blackens, remove it from the pepper flesh, and you have chipotle peppers for salsa or whatever else you want to do with them. One of my brothers thought he hated chipotles, but when I introduced him to them sans ancho, he saw the error of his ways.

Heat level: Medium to Hot, depending on whether or not you keep the seeds


I found this recipe here and I like it. Put on some gloves, then cut the jalapeños in half. Next, gut them. Mix everything except the peppers and the bacon. Fill the jalapeño halves with this cheese mixture, then wrap each pepper in a slice (or half slice, if using smaller jalapeños) of bacon. Smoke them at 300 degrees F. for 30 minutes, or until the bacon is golden brown.

Avocado-Tomatillo Sauce
Tart tomatillos, hot jalapeños, fresh lime, and sweet honey, all bound together with the creaminess of avocado, make this one a favorite sauce. Try it with any rich fish, like swordfish, salmon, mackerel, or bluefish.

Heat your grill to high.

Combine the tomatillos, chiles, lime juice, and honey in a blender and blend until smooth. With the motor running, gradually pour in the oil and blend until emulsified. Transfer to a bowl and fold in the avocados, onion, and cilantro. Season to taste with salt and pepper.