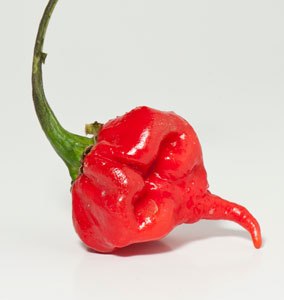 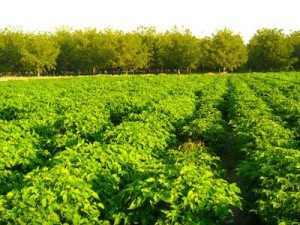 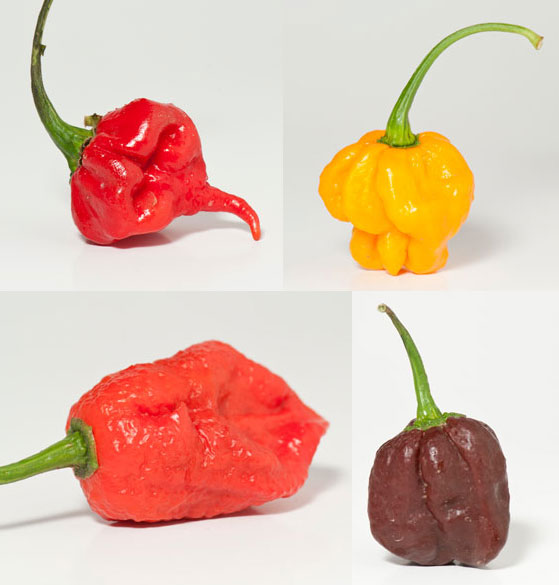 Some of the chiles grown in the super hot field, clockwise from top left: scorpion, scotch bonnet, chocolate habanero, and 7-pot.

There’s some hot stuff going on in southern New Mexico. Now, this part of the world is no stranger to heat: Las Cruces is in the arid Chihuahuan Desert, a stone’s throw away from the “Chile Capital of the World,” Hatch. Nor is this region new to experiments, considering the first atomic bomb was detonated nearby in 1945. Experimentation now has reached a whole new level of heat in Las Cruces, thanks to Marlin Bensinger’s super hot chile field.

Historically, this rich zone of farmland along the Rio Grande River was popular for many crops, including chile peppers. Unfortunately, urban sprawl and declining agricultural prices have caused a drastic drop in farmed acreage. Many authorities agree that the New Mexico chile industry is “in crisis.” Could cultivation of super hot chiles reverse this trend and save the New Mexico chile industry?

Marlin Bensinger and Dave DeWitt think so. In early 2011, Bensinger, a chemical engineer who has worked with peppers extensively for more than 40 years, teamed up with Jim Duffy—a super hot pepper grower from San Diego—and planted an acre of land near Las Cruces with several varieties of super hot chiles to see what varieties would grow well in New Mexico. The field included ‘Red Scorpion’, ‘Chocolate Habanero’, ‘Naga Morich’, and ‘Red 7 Pot’, among others.

During the growing season, the acre was treated like any other chile-growing field, with no special pampering. Plants were observed and data on growth rates, yield, and other factors was collected. The field was a great success, and the plants performed extremely well. Scoville Heat Units measured from the various chile species ranged from around 750,000 SHUs to just over 1,000,000 SHUs for the ‘Butch T Scorpion Red’. For comparison, a typical habanero chile (which many people consider to be very hot) rates only around 100,000-300,000 SHUs.

As the field experiment was drawing to a close, it became obvious that one item was overlooked in the experimental protocol – What do we do with the resulting fresh peppers generated by this experiment? Enter Dave DeWitt – expert marketer and entrepreneur.  Marlin and Dave put their heads together and came up with another experiment – Is there a viable market for the fresh peppers derived from this experiment?  A quick email was sent out and the rest is history.  Fresh peppers went from the fields and on their way to customers across the country within hours  of harvest.

How can this save the New Mexico chile-growing industry? Because the value of super hot chiles is much greater than that of more commonly grown green chile. An acre of super hot chiles in today’s market would be worth at least 10 times that of an acre of green chile, which means that they’re valuable enough for farmers to actually turn a profit. This spells hope for chile growers in New Mexico, if they are willing to try growing a different variety of chile.

Super hot chiles are the new rage among chile gardeners worldwide. At Cross Country Nurseries, which sells thousands of live chile plants online to enthusiasts each year, super hot peppers were the top-selling varieties in 2011, and plant supplies sold out long before demand was satisfied. Super hot chile seeds can be purchased from several sources online. Jim Duffy offers many rare and super hot chile varieties at refiningfirechiles.com. My Magic Plant sells nifty chile growing kits made up of a flame-patterned metal can filled with growing medium and super hot seeds…just add water and stand back. But if you didn’t get a chance to grow your own this year, there’s an opportunity to buy some of the super hot pods from Marlin’s test field…if you’re willing to buy at least 20 pounds of chile (the minimum order).

Now that the growing season is coming to a close, the super hot chile harvest is coming in. While long-term plans include the possibility of industrial-scale growing for the creation of water-base extracts, one acre produced just enough fresh super hot chile to be a problem—not enough for industrial processing, but too much to give away to friends. Enter Dave DeWitt, expert marketer and entrepreneur.  Marlin and Dave put their heads together and came up with a plan: a quick email was sent out and fresh peppers were  their way to customers across the country within hours of harvest.

If you’re interested in procuring some of this super hot chile bonanza, contact Marlin Bensinger via email. But hurry, quantities are limited and winter’s coming. The first frost comes to Las Cruces sometime around the first of November, and according to Bensinger, “If we get a little ‘cold snap’ that would stress the plants a bit, but not a killing frost, the heat level of the peppers might jump by as much as 20%.” Now that’s what I’d call a successful experiment.